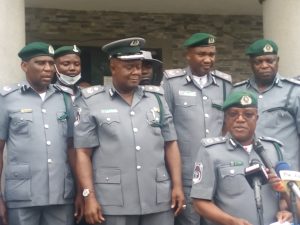 The out-going Coordinator of Customs Strike Force in Zone ‘A’, DC A. Shuaibu has clamped down on illegal wildlife smugglers, seizing pangolin scales and elephant tusks worth
N3,155,667,500.00, approximately N3.2billion in Duty Paid Value (DPV).

He said :
“This is another success story of Nigeria Customs Service (NCS), on-going crack down on illegal wildlife trade. Though this criminality is not essentially a Nigerian thing, sadly some foreigners with active connivance of few Nigerians are bent on using our country as transit route for illegal wildlife trade

“On February 2, 2022, the Customs Strike Force Team upon credible intelligence
stormed the Lekki area of Lagos and intercepted one Toyota Sienna bus with registration number KRD 541 HH suspected to be loaded with prohibited items.

“Immediately, the vehicle with its content, including four occupants were taken to the station. Upon 100 percent joint physical examination, the following items were found, 15 sacks of pangolin scales with total weight of 839.4kg. Four sacks of elephant tusks weighing 145kg, with a total value of N3,155,667,500.00 billion. The four suspects were detained.”

Compt Attah went on :
“The operation was carried out in collaboration with the Wildlife Justice Commission, targeting illegal trade of wildlife from Africa to Asia”.

His assertions :
“What you are seeing today is the fourth major seizure of pangolin scales, ivory and other assorted wildlife parts in Nigeria within the last 13 months.
Our achievement in this regard is a proof of our resolve to fish out and bring all illegal wildlife trade actors to justice.

“For the avoidance of doubt, illegal wildlife trade contravenes Section 63 E and G of CEMA Cap 45 LFN 2004. Nigeria is a signatory to the Convention on International Trade on Endangered Species of Wildlife Fauna and Flora.
As a responsible member of the global community, we cannot allow our country to be used as a conduit pipe for illegal wildlife trade.”

Going further, Compt Attah applauded DC Shuaibu for his exceptional performance , stressing the the top Customs management has acknowledged his resilience and steadfastness in carrying out his statutory assignments.

He described DC Shuaibu as a *Field Commander* with exceptional performance and a hard working officer who is making the Service proud at all times.

Responding to question on the level of investigation and prosecution of those found culpable of illegal wildlife trade, he said ;
“The cases are already in Court and the Court will make a final pronouncement at the appropriate time”.

That was not all.
The high point of the conference was the interactive session when reporters showered encomiums on DC Shuaibu, describing his tenure as the Strike
Force Coordinator as the most outstanding.

Background details :
DC Shuaibu is known for hard work and sincerity. Efficiency is his watch word.
He is approachable but very strict and disciplined.
He is highly time conscious. As a reporter, if you show up late for his official assignment, you will be left behind even if your media outfit is number one in Nigeria. 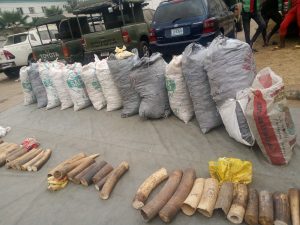