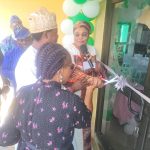 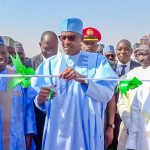 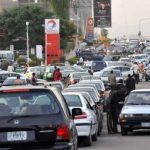 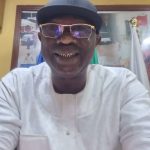 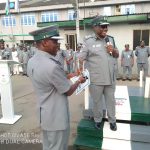 Calmed but shrewd !
Soft-spoken but very intelligent !
Unassuming but uncompromising !
A team player but a real disciplinarian!  His name is Hammi Swomen, the current Acting ACG, in charge of  Excise, Free Trade Zone and industrial incentives.

ACG Hammi Swomen, a Lawyer by background has served Nigeria Customs Service loyally in various capacities. But his assignment in Kirikiri Lighter Terminal (KLT) has been a great milestone that will go down the history of Customs.

Swomen, came, saw and conquered ! He was posted to KLT Command as the Customs Area Controller (CAC), with the  rank of a Customs Comptroller. Interestingly, he is leaving KLT as Assistant Comptroller-General of Customs. What a remarkable achievement !

Swomen is the Customs officer who pragmatically changed the narrative of Kirikiri Lighter Terminal (KLT) Command to a success story in revenue collection, trade facilitation and anti-smuggling operations. It is to his credit that the revenue profile of KLT Command is on geometrical progression reaching N44.4billion in 2022 economic year.

The gentleman officer mounted the saddle in December 2020, with a mandate to plug revenue leakages, enforce extant Import/Export Regulations and facilitate trade.

Thus, KLT Command under the watch of Swomen has been two years of uncommon transformation and exemplary leadership acumen.

Swomen is the same officer who saved Nigerians from the death trap of the killer-water. “Even the sky has felt his selfless service to his father-land”.

Memory Lane :  Our correspondent went memory lane to recall the unforgettable moments at KLT Command under Swomen, as presented below : 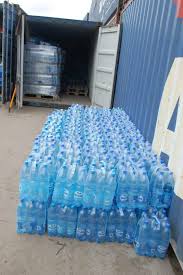 Seizure of contaminated water :
Recall that in April, 2021, Swomen and his gallant officers seized the killer-water. They swiftly intercepted 16,920 bottles of expired water, fully loaded in 40ft container, thereby saving the lives of many innocent Nigerians, who would have consumed that contaminated water. The contaminated water had a Duty Paid Value (DPV) of N5,493,033 million, (approximately N5.5million). 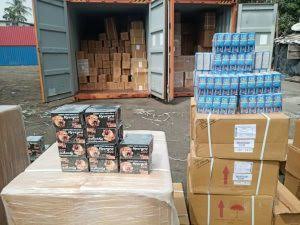 Seizure of Dangerous Drugs :
Swomen through intelligence seized prohibited drugs fully loaded in two 40FT containers, illegally imported into the country from India without approval from the appropriate Agency, worth N212.8million.

The importer of the deadly cargo concealed the restricted drugs with manual blenders, in a deliberate attempt to escape security checks at the seaport; but Swomen with his eagle-eye and credible intelligence uncovered the deadly cargo.

With that massive seizure, Swomen and his team again saved the Nigerian nation from bad effects of dangerous drugs, which would have constituted serious health hazards to Nigerians, especially the youths who are most vulnerable to illicit drugs.

The words of Swomen while unveiling the seized drugs. He frowned;  “As you can see, these are restricted drugs in two 40FT containers.  The manifest shows HOT POT (INSULATED PLASTIC) but on examination, we found the following; 2,493 cartons of cough syrup with codeine (100ml); 383 cartons of Barcadin with Codeine (100ml); 49 cartons of Hyegra (Viagra 220mg); 99 cartons of Delux chilly cutter (manual blenders).

“The drugs were imported from India without NAFDAC approval number.
The drugs are labelled “For Export only”, which shows that the drugs are not even for consumption in their own Country, yet such drugs are illegally imported to Nigeria. You can see the level of economic sabotage by some importers”.

He pointed out :  “Codeine is prohibited for import, sales and consumption in Nigeria. You can see the quantities of restricted drugs brought illegally into Nigeria. These are what they use in destroying our youths”. 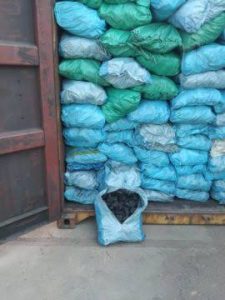 Remarkable performance in revenue collection :
The Command generated N32.7 billion from January to November 2021 as Customs duty and other charges, surpassed N19.7 billion  collected during the same period in 2020.

The N32.7 billion revenue represents 65.6 percent increase on the Command’s total collection for the previous year – 2020. By the month of August 2021, the Command had already exceeded the total revenue collection from January to November of 2020.

For the first time in the history of KLT Command, it collected N4.3 billion in one month (July) 2021, more than 200 percent increase in revenue compared to July 2020 when it generated N1.6 billion.