The Customs Area Controller (CAC) of Katsina Command, Compt Chedi Wada and his team have fought valiantly in protecting the nation’s economy from nefarious activities of smugglers at Jibia border in Katsina State. Their bravery and unwavering determination in raising the tempo of anti-smuggling drive have paid off with many positive results. 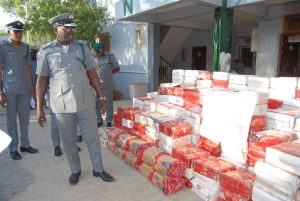 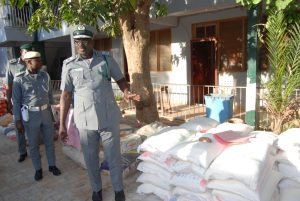 Clearing the air on viral video with false information, Compt Wada explained :  “The attention of Katsina Area Command has been drawn to a video that went viral with deceitful narrative on extortion by Customs operatives from Groundnuts and Beans Sellers, along Kaita-Dankama road in Katsina State. Customs Laws are very clear on Import and Export procedures.

“It is our statutory responsibility to block any illegal means of Import and Export.  Dankama border is among the closed borders by the Federal Government. Only Jibia border is re-opened for legitimate traders to import through it.”

He pointed out :  “All goods coming from across Nigeria are allowed only through Jibia border. Dankama or Kagadama markets are not allowed. Duties are collected on food items coming to Nigeria through Jibia Border, such as Beans, Tiger nuts and Groundnuts.

“We have sample documents of those who paid into the Federation Account on those products for verification.  Any duty paid to Customs goes directly into the Federal Government Account called TSA.”

His assertions :  “Katsina Command has recorded over N500 million from the day Jibia border was re-opened and over N5 billion worth of the value of exported items all passed through Jibia. Customs deals with stakeholders, not end users. For example, Association of Beans and Groundnuts Sellers at the border markets, not Groundnut Retailers or Union of Loaders.

“The Stakeholders agreed with our findings that over 75 percent of their food products are coming from Niger Republic and they agreed to pass through Jibia and pay their duties, which they have been doing. Documents are there to see.

“In our effort to facilitate trade, an agreement was reached with the Associations of Tiger Nuts and Palm Dates to issue their Union receipts to those buying and loading their goods from their markets, to enable them present at any patrol checkpoint they come across. There is verification from the Union leaders to ascertain if they are genuine or not.

“Till today, we don’t have any problem with them. So, the same agreement has been reached with the Associations of Beans, Groundnuts, and Sesame at Jibia, Dankama, Kaita and Kagadama markets. You may wish to verify from them, not the Groundnut cake retailer that was used to attract sympathy of people.”

The CAC emphasised :  “I assure the good people of Katsina State business community that we are professionals and will not relent in discharging our mandates.  All those mischief makers should allow peace in our economic environment or face prosecution when caught smuggling, because we have intensified our strategies on arresting any smuggler sabotaging the nation’s economy.

“We are calling on those mischievous people to stop misleading the public.
The Security Heads in Katsina State have formed an ADHOC committee to go round the State and fish out bad eggs among security agencies such as; Illegal checkpoints and use of Camp boys in discharging official duties.”

He went on :  “Recall that for over a year now, we had smooth Customs operations in Katsina. This is just a litmus test of our success. They want to tell us that they are around but we want to assure them that we are watching them”. 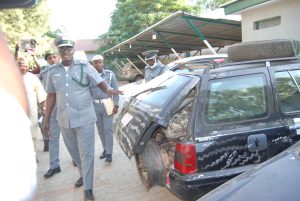 Responding to the issue of goods passing through illegal routes, the CAC said :  “Customs officials cannot be everywhere. Even if Customs in Katsina are to hold hands altogether we can’t cover the circumference of Jibia or Dankama in Kaita Local Government. We use intelligence and synergy with other Security Agencies to carry out our duties effectively”.

His words :  “I wish to calm people’s anger on the way mischief makers used the psychology of sympathy and played with their intelligence by giving false impression about Customs. We have gone beyond all these things and you may wish to verify.

“We are not unaware of this particular period of the year. Also election is fast approaching and campaigns are on top gear.

“We are grateful to the Almighty God for giving us a straight forward leader in person of CGC Ibrahim Hameed Ali, who does not tolerate indiscipline. We also thank his Management Team for giving us their kind support.

“We thank His Excellency, the Executive Governor of Katsina State with his Executive Council Members for their kind support to Customs operations in Katsina State.
The same gratitude goes to the Two Emirates and the good people of Katsina State.  May Allah bring peace back to our land. May He also bless us and our Country.”