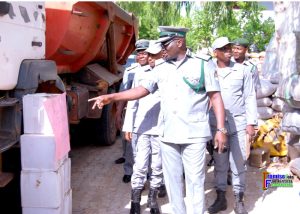 The Katsina State Command of Nigeria Customs Service (NCS), has recorded exceptional performance in export trade to over 20,263.99 tons within few weeks, from 15th August to 28th September 2022.

This remarkable performance is coming just a short while after the same Command realised over 10,827.40 tons of export trade facilitation.

Those were not all.  Katsina Command under the leadership of Compt Wada Chedi also made seizures worth over N79.3million within the period under review.

Most impressively, the huge volume of export trade facilitated by Katsina Customs Command will boost the nation’s economy, in line with the policy of Federal Government to enhance growth of non-oil export sector.

On revenue generation, the Command within the period under review,  collected N124, 896,718.27million, with significant increase of N25,119,375.27million from the previous month. The increase in revenue was achieved following rejigged operational strategies, as well as constant patrols along Jibia-Katsina metropolitan by Compt Wada’s team and all security agencies working in synergy.

Addressing reporters during press conference in Katsina, Compt Wada attributed the increase in exports and other feats recorded by the Command to doggedness and resilience of officers, who are working in tandem with the vision of the Comptroller General of Customs,  CGC Hameed Ibrahim Ali, to enhance economic growth.

He explained that on anti-smuggling drive, the Command made 29 seizures, even as three suspects were arrested in connection with some of the seized items.

“There was an increase in seizures compared to last month due to intensified patrols and information received from the community, a sign of improved working relationship, courtesy of Customs Community Consultative Forum”.

Speaking further, Compt Wada called on the general public to give credible information to officers for anti-smuggling operations,  in order to protect the nation’s economy against nefarious activities of saboteurs.

He also emphasised that legitimate traders should come forward as his doors are always open for their complaints and suggestions. On the contrary, he warned smugglers to desist from their evil acts because the Command would not relent in fighting back.

OBSERVATION  :  More so, it has been observed that  Katsina Command under Compt Wada has outstanding records of successes in trade facilitation, anti-smuggling and inter-agency collaboration despite challenges faced within the border communities.