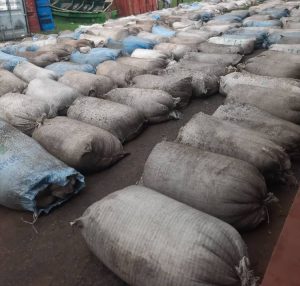 The Seme Area Command of Nigeria Customs Service (NCS), has made yet another giant stride in its anti-smuggling operations to save the nation’s economy from nefarious activities of smugglers.

The latest news reaching our platform now reveals that the Command under the leadership of Compt Bello Mohammed Jibo, as Customs Area Controller (CAC), just intercepted smuggled Petrol worth over N19.8million in Duty Paid Value (DPV).

With interception of this quantity of petrol, Seme Command has prevented what would have constituted losses to the nation’s economy, thereby supporting the efforts of Federal Government on national development.

Most remarkably, this seizure of N19.8million worth of fuel is coming not quite long after the same Command intercepted large quantity of Petroleum product; and other prohibited items worth millions of Naira. It will also send a strong signal to economic saboteurs to desist from illicit trade.

The Public Relations Officer of Seme Customs, SC HUSSAINI ABDULLAHI, in a press statement described the current seizure as continuation of efforts by the Command to suppress smuggling of petroleum products in all nooks and crannies of the border communities.

He disclosed that the petrol was seized by operatives of Seme Area Command on routine patrol along the bushes within Seme and Badagry axis.

His explanation :  “The large quantity of petrol was loaded in jerrycans and concealed in sacks. The seizure was made early hours of today Thursday, 22 SEPTEMBER 2022.

In his remarks, Compt Jibo warned perpetrators of illegal activities to stay off Seme Border routes or continue to count heavy losses, as his men are determined to frustrate them out of the area.

Recall that, only three weeks ago Seme Command made similar seizure of 119,000 litres of Premium Motor Spirit (PMS), commonly known as petrol.