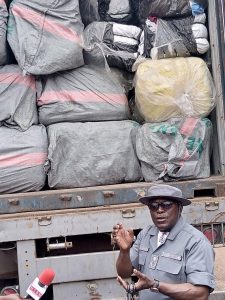 The Federal Operations Unit (FOU) Zone ‘A’ of Nigeria Customs Service, through its anti-smuggling onslaught
has seized 20 drums of carbide; known to be chemical substances used in making improvised explosive devices (IEDs).

Report shows that the 20 drums of carbide were concealed underneath a truck by smugglers but operatives of FOU uncovered them through intelligence, even as they swiftly seized the truck along Ijebu Ode area of Ogun State.

Addressing Journalists in Lagos, the Customs Area Controller (CAC) of the Unit, Comptroller Hussein Ejibunu
explained :  “On sighting our officers, the driver of the truck fled and didn’t return for two days. After which, the officers opened the sealed trucks where the drums of chemical were concealed underneath.

“The Law says this type of importation requires an approval from office of the National Security Adviser. Also, an End- User-Certificate must be issued to allow importation of such item into the country.”

He frowned :  “Allowing this type of chemical into the country unchecked can create serious security challenge for the government.

“Carbide is flammable and reactive. It can cause explosion when mixed with other chemicals and exposed to water or moisture.  It forms flammable acetylene gas that can be used to endanger lives by lawless individuals.

“Aside other health hazards, the chemical on exposure can irritate the mouth, nose and throat if not properly handled. Inhaling Calcium Carbide is also dangerous to the lungs.”

The CAC informed :  “Higher exposures can also cause a build-up of fluid in the lungs leading to emergency medical situation. So, it importation is strictly controlled by the office of National Security Adviser.”.

In the same vein, the unit made seizures worth N579,412,549 in the month of August 2022, even as 10 suspects were arrested in connection to some of the seized items.

The seizures include 5,593 bags of foreign rice (equivalent to 9 trailers truck load), 56,725 litres of Premium Motor Spirit (PMS), 375 bales of used clothes, 242 parcels of Indian Hemp, 41 pieces of military camouflage, among others.