The Seme Command of Nigeria Customs Service is on red alert to curb smuggling of petroleum products along the creeks and waterways within the border communities.
This intense surveillance has yielded tremendous results, as the Command just intercepted petrol worth N28.9million on Badagry waterways.

This interception of N28.9million worth of fuel along Badagry waterways is just one out of numerous seizures of smuggled petrol made by Seme Command in the last few months.

Seme Command under the watch of Compt. Bello Mohammed Jibo as Customs Area Controller (CAC), has made giant strides in anti-smuggling operations with seizures of petroleum products and other prohibited items worth millions of Naira in recent times. 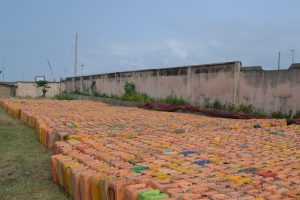 In a press statement signed by the Public Relations Officer of Seme Command, SC HUSSAINI ABDULLAHI, he revealed that the petrol filled in 3,998 Jerrycans is equivalent to 119, 940 litres, which is about four tanker loads.

He disclosed :  “The continuous surveillance and offensive patrols by officers and men of Seme Area Command along the creeks and beaches recorded another huge success. In the late hours of Monday August 15, 2022, the Command received a tip-off on large quantities of Petroleum Motor Spirit (PMS), commonly known as petrol stored close to a beach, along Badagry waterways, intended to be smuggled out of the country.

“Immediately, our men stormed the location and the product was successfully evacuated to the Command premises at Seme Border.

“The findings revealed that 3,998 Jerrycans of PMS equivalent to 119, 940 litres, which is about four tanker loads was discovered. The seized petroleum product has a Duty Paid Value of N28.9 million.”

In the same vein, Compt. Jibo reiterated the commitment of his officers to continue making smuggling unattractive, while noting that economic saboteurs will be frustrated until smuggling reduces to the barest minimum.

The CAC called on Nigerians to provide useful information that could help to curtail illegal activities of unscrupulous elements along the border corridors.

He applauded his officers for their high level of discipline, patriotism and professionalism exhibited in the discharge of their duties. He urged them to keep making the Command and the entire Customs Service proud.

More so, the CAC acknowledged and appreciated the support enjoyed from the host communities, as well as other security agencies, without which the Command wouldn’t have made this great feat.

Also, he expressed his gratitude to the Comptroller General of Customs, CGC Hameed Ibrahim Ali and his management team for motivating officers by providing necessary work tools for improved performance.