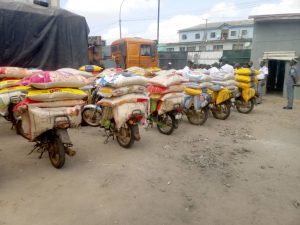 The Customs Area Controller (CAC), Federal Operations Unit (FOU) Zone ‘A’, of Nigeria Customs Service,
Compt Hussein Ejibunu has drawn the battle line between his Unit and die-hard smugglers operating with Motorcycles (popularly known as Okada) within his area of responsibility.

Compt Ejibunu and his gallant officers demonstrated doggedness, as they fearlessly seized 42 motorcycles used in conveying prohibited items across the borders.

More so, the FOU officers made seizures with Duty Paid Value (DPV) of N537,479,927.5 ( approximately N537.5 million) in the month of July, 2022 alone, even as they arrested nine suspects in connection with the seized items.

Others were six units of used imported vehicles; 2,634 cartons of slippers-shoes; 900 pairs of second-hand shoes; 42 motorcycles; as well as other items.

In the same vein, the Unit recovered N24,957,351.71 revenue from under-payment on trade good. The Unit made the underpayment recovery through issuance of demand notices to importers of the goods.

Addressing Journalists while showing the mind-boggling seizures, Compt
Ejibunu said :   “You can see misplaced priority in the use of scares forex for importation of expired seasonings (Chicken Cubes), used clothes, shoes and second-hand tyres that are not only injurious to the nation’s economy but also despicable act by some desperate importers making monetary gains at the detriment of peoples’ health.”

The CAC expressed displeasure on smuggling of poultry products :
He emphasised :  “Poultry products remain prohibited items under the import list, because of the health hazards and economic implications.

“It may interest you to know that the Federal Government banned importation of poultry products, so as to support the growth of our domestic poultry industries and to protect them from foreign competition.

“Also, it has been discovered that in the process of transporting these products, some hazardous chemicals are applied to preserve them.
This act calls for public concern, as it could be a source of different diseases.

“Perhaps, there is no Nigerian family that has not been affected either by accident caused by a substandard or used tyres, skin diseases or cancer and many more; as a result of patronage of prohibited products imported into the country. While we sympathise with those affected by this menace, we are also calling on patriotic citizens to cooperate with the Service and other law enforcement agencies to stamp it out.

“You may recall that, some weeks ago, Nigerians paid more for petrol amidst scarcity. Despite the fact that government had subsidised the product for local consumption, many Nigerians still face this hardship; partly because some unscrupulous citizens decide to satisfy their desires by smuggling the products into Republic of Benin; some of which are along the border corridors”.