* As Compt Hamisu hands over large quantities of fake drugs to NAFDAC, NDLEA

The Nigeria Customs Service, Federal Operations Unit (FOU) Zone ‘B’ Kaduna is giving smugglers of hard drugs and unregistered pharmaceutical products a tough time, as the Unit is leaving no stone unturned in seizing such dangerous drugs.

That was exactly what played out in Kaduna State, as the Customs Area Controller (CAC) of the Unit, Compt A.B. Hamisu psc (+), fearlessly seized and handed over 124 sacks of indian hemp, 104 cartons of African Viagra, as well as other unregistered pharmaceutical products to NDLEA and NAFDAC.

While handing over the drugs, Compt Hamisu said the initiative was in furtherance of his commitment and his officers to enforcement of Government policies. He emphasised the importance of maintaining a cordial working collaboration with other security agencies in the State.

His words :
“The FOU Zone ‘B’ Kaduna in furtherance of its commitment to enforcement of Government policies and synergy with sister agencies has handed over 124 sacks of indian hemp; 104 cartons of African Viagra and other unregistered pharmaceutical products to National Drug Law Enforcement Agency and National Agency for Food Drugs Administration and Control”.

He disclosed :
“The Indian hemp was intercepted at Kauran Namoda leading to Zurmi, an area considered to be occupied by bandits and other criminals.

“On the other hand, the 104 cartons of unregistered pharmaceutical products were seized along Gusau-Zaria road onJune 23, 2022  through timely use of intelligence”.

He pointed out :
“The Unit sees interception of such illicit products as important, considering the fact that if they are allowed undetected, the consequences on the society will be of great concern.”

Speaking further, Compt Hamisu urged the public to always volunteer information to Customs that will lead to similar interventions, as such information will be treated with utmost confidentiality.

More so, Compt Hamisu has continuously increased the tempo of anti-smuggling operations in FOU Zone ‘B’, and his commitment in protecting the nation’s economy from nefarious activities of illicit traders have yielded tremendous results, as shown in the number of seizures the Unit records on monthly basis.

Below; are more pictures taken during the handing over of the seized drugs 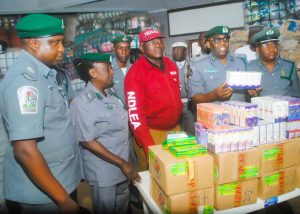 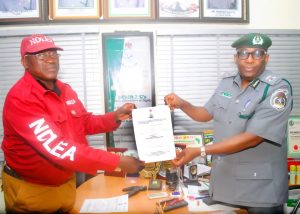 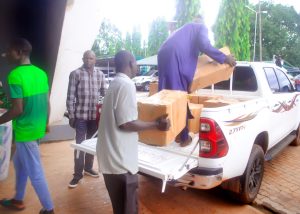