Compt Swomen, who is highly skilled in Customs operations disclosed this yesterday during a press conference at KLT Command.

He hinted that KLT Command under his watch is currently processing fresh applications for new terminals, in order to increase capacity utilisation for seamless cargo clearance and trade facilitation.

This laudable initiative is coming on the heels of successful reactivation of a moribund terminal by Compt Swomen; even with huge revenue collection of over N23.6 billion realised in half year of 2022.

Those were not all.
Giving more details on his forecast for KLT Command in the second half of 2022, Compt Swomen informed :
“We are looking at increase in cargo throughput and compliance level”.

He added :
“For the second half of 2022, the Command has various plans to improve its performance, some of which are ; “Introduction of training programmes for officers and men of KLT on investigation, risk analysis, enforcement duties and CEMA.

“Utilisation of risk management techniques to detect instances of non compliance and blocking of all revenue loopholes. Continuous engagement with stakeholders to ensure cordial working synergy.

“Working hard to increase the number of terminals. Currently we are processing fresh applications for new terminals.”

His assertion :
“Consequent to these developments and plans for the remaining part of this year, operatives of KLT Command have been charged to be on their toes, to be more productive, disciplined and professional to carry out their statutory functions effectively”.

Also, the CAC unveiled massive seizures made by his team worth over N484.7million in Duty Paid Value (DPV). These include;
2 x 40ft containers laden with restricted drugs; such as cough syrup with Codeine and Hyergra worth N212,775,950.00.  1 x 40ft container with 795 packages of prohibited footwear falsely declared as water taps and closets. 1 x 40ft container with 1,447 packages of prohibited mosquito coils; and other items falsely declared as non woven paper filter, worth N271,963,311.00, as shown on the pictures here.

Pictures of seized items below : 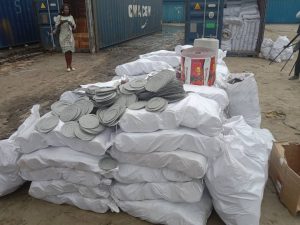 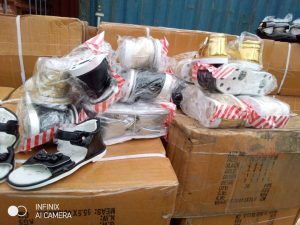