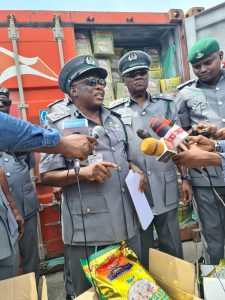 The CAC and his team addressing reporters  during press conference

The Apapa area Command of Nigeria Customs Service (NCS), has made spectacular performance in revenue collection, trade facilitation and anti-smuggling drive in the half year of 2022, with a huge sum of N522.4 billion collected for the Federal Government.

The Customs Area Controller ( CAC) of the Command, Compt. Malanta Ibrahim Yusuf, disclosed these details to reporters during a press conference at the Command yesterday.

Speaking further on activities of Apapa Command in the last six months, Compt Malanta revealed that the formation made remarkable increase in exportation of non-oil commodities, with 2.5 million tons, which is more than 540 metric tons recorded in the previous year, 2021.

He explained that government scheme on export incentives played important role in boosting export trade in the country.  Items exported within the period under review include steel bars, agricultural and mineral products. 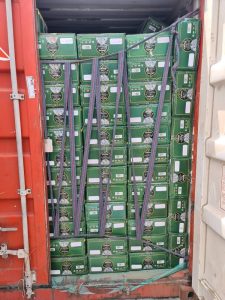 Those were not all.
Apapa Command under Compt Malanta, recorded seizures worth over N8.3 billion in Duty Paid Value (DPV) within the same period. These include 32 containers of processed/unprocessed wood; five containers of unregistered pharmaceuticals; 18 containers of used clothes/shoes; 12 containers of foreign parboiled rice; seven containers of vegetable oil; three containers of tomato paste and 1x20ft container laden with 150 cartons of tramadol.

The CAC revealed that 21 suspects were apprehended in connection with the seizures, even as another suspect was arrested following recent seizure of 1x20ft container of tramadol; and he is currently undergoing interrogation.

Responding to questions on anti-smuggling strategies of the Command, which yielded tremendous results, Compt Malanta informed:
“Our anti-smuggling operation is guided by the Federal Government Import and Export prohibition lists, as well as other fiscal policies as directed.

“The Command just recently handed over 2x20ft containers No. SUDU 7774749 and UETU2798479 laden with 150 cartons of illicit hard drugs to National Drug Law Enforcement Agency (NDLEA). That initiative further strengthened the existing synergy and relationship between government agencies in the premier port.”

He went on :
“The Command consistently strives in its core mandates of revenue generation, prevention and suppression of smuggling, trade facilitation, implementation of government fiscal policies, as well as collaboration with other government agencies to enhance ease of doing business in the port.

“These feats were made possible because of the resilience of our officers, who identified and mitigated revenue leakages, while sustaining the level of compliance by importers/stakeholders in the Command.”

The CAC enthused :
“I want to respectfully extend our profound appreciation to the Comptroller General of Customs, CGC Hameed Ibrahim Ali and his Management team for their unrelenting support, government agencies in the port for continuous collaboration and officers/men of Apapa Command for their tireless commitment, our compliant stakeholders and the media for their unalloyed support throughout this period.”

Compt Malanta concluded that Apapa Command under his watch will remain focused in carrying out its statutory functions in line with government policies, to enhance economic growth and development