* This is double-poison, Mallam Salim said; pointing to foreign cigarettes expired over two years ago, but imported into Nigeria illegally.  Our correspondent observed that the expired cigarettes loaded in thousands of cartons were well packaged.  On the surface, the cigarettes appeared very attractive like cartons of noodles; but the real contents were deadly. 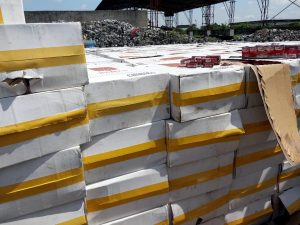 The Standards Organisation of Nigeria (SON) has saved millions of innocent Nigerians from killer products,  as the Agency destroyed fake and sub-standard goods worth billions of Naira; as well as foreign cigarettes expired over two years ago but imported into Nigeria illegally.

In fact, the scene at the destruction site in Lagos was indeed frightening, as large quantities of stuffed tyres; sub-standard electric cables; lubricants; aluminium roofing sheets; gas cylinders, expired cigarettes and other items worth billions of Naira were seen everywhere in the premises

The large expanse of land where the destruction site is situated was totally occupied with fake products.  The entire premises appeared like a big factory producing various items; but ironically, what the eyes saw were all fake goods being destroyed in a jiffy.

Imagine the financial losses, as billions of Naira went down the drain within a twinkle of an eye ! Imagine the dangers and health hazards that would have befallen the entire nation, if such deadly items had been purchased by millions of unsuspecting consumers.

In was indeed mind-boggling, as officials of different agencies and Journalists, who witnessed the destruction were astonished at the level of economic sabotage perpetuated by unpatriotic Nigerians.

Even the Director General of SON, Mallam Farouk Salim,
who monitored the destruction exercise could not hide his displeasure.  He frowned at the nefarious activities of economic saboteurs in destroying the nation’s economy with fake products.
Once could see the sadness on his face, speech and gesture.

The SON DG exclaimed  !!!
“Look at the mountain of electric cables !  Look at thousands of stuffed tyres ! look at expired cigarettes in thousands of cartons, which are like double-poison to the body ! Look at the gas cylinders that can explode and kill innocent people ! See roofing sheets melting !

“Billions of Naira used in importing these sub-standard goods can build many factories and create thousands of jobs for Nigerians”. 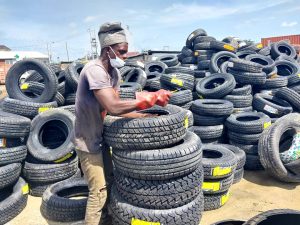 Also speaking, the Chief Operating Officer of MisCom Cables and Wires limited, Mrs Bukola Adubi, who witnessed the destruction lamented the negative effect of bringing in substandard products in the country.

She said :
“We are going to step up our working synergy with SON in the fight against fake products because it is affecting our business and the economy at large.

“The people faking these products are using the names of major brands. This is affecting our legacy, our brands and our image in the market. Another problem is that the consumers and general public are not aware. They cannot differentiate between original and fake goods.” 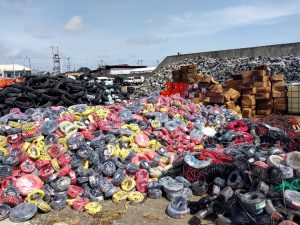 In the same vein; the
Assistant Chief Scientific Officer, Lagos Liaison Office, National Environmental Standards and Regulations Enforcement Agency (NESREA), Mrs Bisiriyu Adesewa, informed :  “Some of the items will be handed over to recycling companies to make other goods from them, while the expired cigarettes must be destroyed completely.

“The stuffed tyres can be used for rubber shoes and other items. The recycling companies will buy the items, extract what they need
and pay the money into the federation account.”

In her remarks, the Head, Federal Competition and Consumers’ Protection Council, (FCCPC), Mrs Susie Onwuka said that their statutory responsibility is to protect the consuming public.

She disclosed that the Council signed a Memorandum of Understanding (MoU) with SON, as well as other regulatory agencies on removal of substandard goods from the local markets.”

Also, the Assistant Commissioner of Police, ACP Lawrence Iwodi, from the Force Criminal Investigation and Intelligence Department,
Alagbon, Lagos, said the Police is working with SON to curb the menace of sub-standard products in the economic environment.