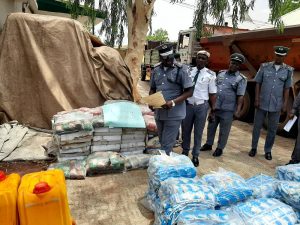 The Katsina State Command of Nigeria Customs Service (NCS), has made the Service management and entire Nigerian nation proud of its
giant strides on export trade facilitation and revenue generation for economic growth.

Katsina Command under the watch of Compt Chedi Wada, as the Customs Area Controller (CAC), made unprecedented performance in export trade facilitation worth millions of Naira from May 1, 2022 to June 15, 2022, about six weeks.

Those were not all.
Compt Wada, who is highly skilled in Customs operations generated over N104.7million that was paid into the federation account within the same period under review.

He also made remarkable performance in anti-smuggling operations with seizures worth over N38.6million in Duty Paid Value (DPV) in the same period.

Addressing Journalists in Katsina State during a press conference, Compt Wada, known for his doggedness in tackling smuggling displayed seizures of vehicles, which include Nissan Jeep valued at N1,755,000.00 (approximately N1.8million); GOLF – 3 worth N1.6million; Toyota Carina with DPV of N742,500.00 and another Toyota Carina worth N675,000.00.

Speaking further, Compt Wada stressed that with the re-opening of Jibia border, the Command is expected to discharge its statutory obligations, which include control of import and export through the border with strict adherence to Customs procedures in revenue collection, as well as other regulations.

His words :
“Going by the Command’s previous anti-smuggling records, this period has a decline in the number of seizures. This is due to re-opening of Jibia border, providing opportunity to conduct import and export legitimately against smuggling through illegal routes. Re-strategised operations on anti-smuggling activities by constant patrols, surveillance, intelligence gathering and dissemination accordingly.

“The Command maintained cooperation and synergy with other government security agencies at the border communities.”

Compt Wada warned smugglers to desist from economic sabotage and embrace legitimate trade, as his Command will leave no stone unturned in seizing prohibited items and ensuring that illicit traders are prosecuted according to the laws of the land. 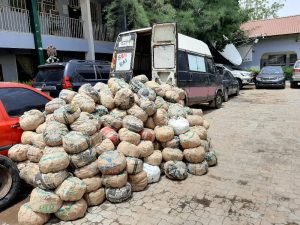 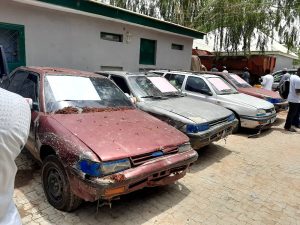