Just recently, the Customs Area Controller (CAC) of Ogun 1 Command of Nigeria Customs Service (NCS), Compt Bamidele Makinde showcased seizures of 4,603 bags of foreign rice (equivalent to 8 trailers), as well as 19 engines of speed boats and other items worth over N100.1million in Duty Paid Value (DPV), made by his Command in April, 2022.

Those were not all. The CAC also displayed 37,450 litres of smuggled petrol ; 300 Cartons of frozen poultry products; three Sacks of Cannabis Sativa; 900 Machetes, seven bales/seven sacks of used clothes; 2,195 pairs of used shoes; female hand-bags; 89 cartons of foreign wine; eight vehicles used as means of conveyance; two units of motorcycles, 35 cartons and 12 packets of tomato paste, among others.

Compt Makinde while addressing Journalists during a press conference, disclosed that the 19 engines of boats worth over N17.322million were intercepted in the  bush within Idiroko border community.

Most shocking was the fact that some bags of rice were concealed by smugglers within the engine parts of vehicles, in a deliberate attempt to escape security checks at the border; but Compt Makinde uncovered them through intelligence.

That remarkable seizure was a swift intervention by Compt Makinde, which prevented such killer Rice concealed in a car engine with acidic contents of the battery from entering the local market and be consumed by unsuspecting Nigerians.  That seizure was just one out of many interventions by Customs in protecting innocent citizens from consuming items that can pose serious health hazards in the long-run.

Our correspondent captured the seized items in photo news, as shown below. 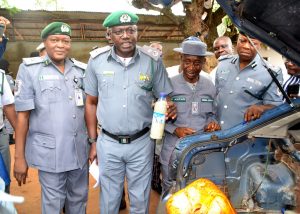