The Nigeria Customs Service, Lagos Industrial Command is poised for greater performance this year, as the new Customs Area Controller (CAC),
Compt Queen Ogbudu is bringing intelligence and fresh impetus to bear in operations at the Command.

Compt Ogbudu, who just assumed duties has already organised stakeholders’ meeting, where she intimated factory owners under her area of coverage about the fiscal policy of Federal Government on new Excise Duty rate.

Speaking at the stakeholders’ meeting yesterday, Compt Ogbudu called for total compliance with the new Excise duty, which begins on June 1, 2022.

Compt Ogbudu, who commended factory owners for their timely payment of excise duty before introduction of the new policy, emphasised that government needs revenue from excise duty to provide infrastructure and grow the economy for the benefit of all citizens, as well as investors.

She said the stakeholders’ engagement was imperative for her to meet the factory owners as the new CAC of the Command, inform them of the new excise rate personally, though they were written previously; and to ask for more support in implementing the new policy.

She explained :
“This meeting is very important to inform you about the new fiscal policy signed by the Minister of Finance, though we wrote you initially.

“First, let me thank you for your contributions, dedication and patriotism to Nigerian government by paying your excise duty and doing documentation as at when due. We need more support, openness and cooperation.

“For this year, government brought more items under excise control. These are non-alcohol, carbonated and sweetened beverages.
A grace period of 90 days was given and full implementation begins in June 1, 2022”

The CAC added :
” We need this excise duty to generate revenue for government. We cannot keep borrowing. Other nations collect excise duty to develop their economies and Nigeria cannot be left out.

“There are still some factories that are not yet under excise control and they must do the right thing.  We give them 14 days grace to come forward before we get them out and  seal their premises.”

The meeting attended by stakeholders from different companies, paved the way for extensive deliberations between Compt Ogbudu and factory owners. The programme was attended by representatives of Coca-Cola, Guinness, 7-Up, Cocoa House Aftica, La-Casera and other manufacturing firms.

Stakeholders at the meeting applauded Compt Ogbudu on the orderly manner she coordinated the programme, calling for patience and understanding from Customs in implementing the new policy, in consideration of the challenges facing manufacturing companies in the country.

Observation :
Apparently, it’s a new dawn for Customs at Lagos Industrial Command. Our correspondent observed that Compt Ogbudu was  calm and patient in handling the programme.  After her opening remarks, she allowed all the stakeholders enough time to express their concerns.  She promised that
the meeting will hold quarterly, in order to address the challenges facing them in the operating environment.

She also said issues that can’t be handled by the Command will be taken to the Zonal Coordinator in Zone ‘A’ for appropriate consideration.

While introducing the CAC and her team, the Customs Zonal Public Relations Officer, CSC Nkeiru Nwala, described Compt Ogbudu as a veteran Customs Comptroller and team player, who has served Customs diligently at different capacities,  before being posted to Lagos Industrial Command.

Below :  Stakeholders at meeting 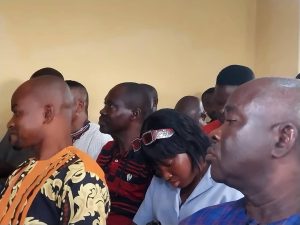 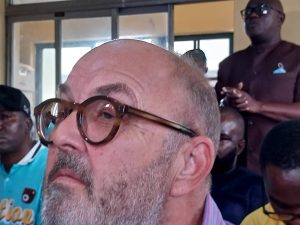