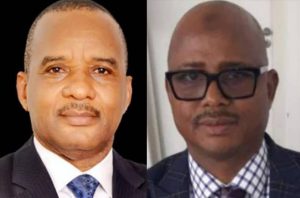 From left; Dr Jamoh, the DG of NIMASA; and Jamo, the retiree of NNPC :

There are indications that the reported allegations of N1.5trillion and $9million fraud against Dr. Bashir Jamoh, Director General, Nigeria Maritime Administration and Safety Agency (NIMASA), was a case of pure mistaken identity and blackmail by one Mr Jackson Ude.

Specifically, last week Friday, the social media was agog when the United States-based Nigerian journalist, Jackson Ude tweeted on his handle @Jacksonpbn, alleging that a humongous N1.5trillion and $9million were traced to the DG’s personal account.

However, Independent investigations carried out by our correspondent has shown that it was a case of mistaken identity, as the person Jackson Ude was interacting with was not the NIMASA DG, Dr Bashir Jamoh but rather it was one Mr Hamza Ibrahim Jamo , a retired employee of Nigerian National Petroleum Corporation (NNPC), a different individual without link to NIMASA DG.

Investigations carried out by our correspondent revealed that the alleged account number; Fidelity Bank Account 4020949836, the BVN 22151837650 and Cell phone number 08034517410 actually belonged to Hamza Ibrahim Jamo who is presently a representative of Talent Enterprise, a Dubai-based training firm.

While speaking with journalists, in order to clear the air, the real Jamo described Mr Jackson Ude, the Pointblanknews Publisher as a serial blackmailer.

Apparently, Jackson Ude thought he was chatting with the NIMASA DG while interacting with the NNPC retiree via WhatsApp.
However, while the NIMASA DG’s surname is Jamoh, the individual that journalist Ude chatted with and published screenshots of their conversation is Jamo, an almost similar surname without the letter ‘h’ at the end.

Jamo, the former NNPC employee disclosed to reporters that he retired after 35 years of service, and that his gratuity was paid into the Fidelity Bank account where Ude had reported a humongous sum to the tune of 1.5trillion.

While stating that he never had such a huge amount in his account, he disclosed further that the account has been closed due to activities by fraudulent persons to steal his funds.

He told journalists during a telephone interview from his Kaduna base that the Economic and Financial Crimes Commission (EFCC) had invited between August and September 2019 when they uncovered plans by criminals to hack into the account and steal his money.

According to him, the anti-graft body arrested suspected fraudsters in Lagos, Benin and Bauchi in connection with the fraudulent acts which caused him to shut the account for almost a year.

Reporters also visited the website of TEI www.talentexpertiseintl.com where the name, profile, and picture of Jamo Ibrahim Hamza published as one of its directors

The Pointblanknews report had accused the DG of NIMASA of setting up the company, TEI which has also been discovered to be false

Following the release of the publication by Ude, the Dubai company Jamo represents has issued a statement that they never had any business relationship with NIMASA.

In the statement signed by John Philip, Chief Executive Officer of Talent Expertise, stated “I wish to confirm that Talent Expertise International operating out of Dubai, UAE and Abuja, Nigeria has no connection with Dr. Bashir Yusuf Jamoh, Director General of NIMASA.

“Contrary to the said notification, Dr Bashir has never at any time held any position within TEI and he has never had a role in the formation or running of this company

“I wish to confirm that at no time in the past has TEI had any formal or informal client/supplier relationship with NIMASA. At no time have we ever provided services to or received payment from NIMASA

“Talent Expertise International is being represented by Mr. Hamza Ibrahim Jamo as its local Nigerian Director, a retiree from Nigerian National Petroleum Corporation” the statement read