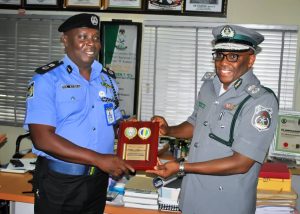 From left : CP Ayoku presenting a  gift to Compt. Hamisu as part of inter Agency collaboration, during the visit :

The Customs Area Controller (CAC),
Federal Operations Unit, FOU, Zone ‘B’,   Kaduna, Compt Albashir Hamisu, has identified inter-agency collaboration as a major strategy to curb smuggling of prohibited items into the economic environment, as well as lingering security challenge in the country.

In recognition of this fact, Compt Hamisu is promoting greater working synergy with the Police and other sister agencies within his area of responsibility.

Compt Hamisu, made this known when he received the Commissioner of Police in charge of Kaduna State, CP Yekini Ayoku in his office during a working visit.

He stressed :
‘FOU Zone ‘B’, will continue to strengthen its inter-agency collaboration  in areas of timely information sharing,
joint operations and capacity building”.

He pointed out :
“Working in close synergy is in our best interest. This is quite imperative in tackling illicit trade and insecurity in the system.   Our close collaboration will certainly achieve a win-win situation for us as separate services for the Federal Government”.

Compt Hamisu added :
“As a matter of fact, we are members of the same family manifesting in different colours because of our duties and division of labour. This close relationship makes intelligence gathering and sharing very simple while carrying out our statutory functions.

“As long as anti-smuggling operations are concerned, we must recognise the fact that we need the Police’ .

Speaking further, Compt Hamisu, gave the assurance that the Unit wull support and cooperate on round-the-clock basis whenever there is need for such.

In his response, CP Ayoku, acknowledged the importance of Customs in fighting smuggling in the country, specifically in Northern part of Nigeria.

He promised to give necessary support and cooperation to Customs enforcement officers to enable them discharge their duties effectively.

Ayoku also  pledged to continue working with other security agencies to protect the lives and properties of  citizens.

He added that the Police does not work alone but maintains synergy with other security agencies. CP Ayoku, described Customs as a sister security agency important in policing the country and providing security at the ports and within border communities.

CP Ayoku emphasised :  “We are working collaboratively with all sister security agencies and it has resulted in relative peace being enjoyed in Kaduna State at the moment.

The Police boss, who was accompanied by Deputy Commissioner of  Police in charge of operations, assured Compt Hamisu of his full support at all times. 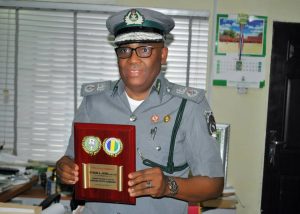