It was like rain of seizures yesterday at the office of Customs Strike Force Team ‘A’, Lagos, as the Team unveiled seized prohibited items worth over N6.6 billion in Duty Paid Value (DPV).

It was also a moment of shock, as newsmen who came for media coverage were astonished at the level of economic sabotage perpetuated by unpatriotic Nigerians.

Our correspondent observed that there were seizures on both sides of the premises, starting from the main entrance of the office, up to the area linking the big building where the conference hall is located.

While large quantities of seized foreign rice were seen on the left side of the premises, bales of Second-hand clothes, donkey skin, cannabis sativa, tramadol and other prohibited items occupied the right side of the office. 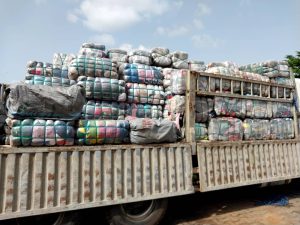 Addressing Journalists during a press conference, Coordinator of the Strike Force team, DC Muhammad Sani Yusuf said :
“Our resolve to step up the fight against smuggling and enemies of the economy is renewed every day, because smugglers are unrelenting. We won’t allow them have their way through whichever means they choose.

“Our 24 hours patrol using logistics  provided by the Comptroller-General of Customs, CGC Hameed Ibrahim Ali, has yielded more results in addition to the seizures we showed you two months ago”. 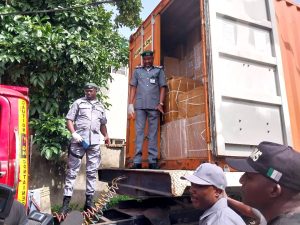 DC Yusuf pointed out:
“You may recall that the Federal Government through the ministry of health, had banned production/importation of Codeine because of its gross abuse.

“Drug abuse is responsible for social vices and criminalities in society. This has been witnessed in the pervasive outburst of insecurity. Hence, all patriotic citizens are enjoined to support the fight against smuggling of any kind.”

On seizure of wild life, DC Yusuf explained :
“The continuous extermination of wild life, in this case, donkey skin; has negative impact on the bio-diversity in the ecosystem. Consistent elimination of donkeys will eventually lead to the extinction of the specie, which will consequently affect the ecosystem.

“By our mandate, we shall always ensure compliance with all Customs extant laws, ensure complete payment of duties and penalties through issuance of Demand Notices (DN), when necessary. Interestingly, N1,355,892,268 billion was collected as revenue for the months of March and April, 2022.”

His assertions :
“May I use this briefing to send a strong message of warning once again to all those contravening Customs laws and government fiscal policies that our readiness against their illegalities is sharpened with renewed vigor. While we assure our esteemed compliant traders and importers of our support on trade facilitation.”

The high point of the conference was a visit to government warehouse at Ikorodu area of Lagos, where DC Yusuf showed Journalists three containers fully loaded with seized items, which include imported female shoes and other contraband.