*As Compt Wada warns against illegal importation through Jibiya border 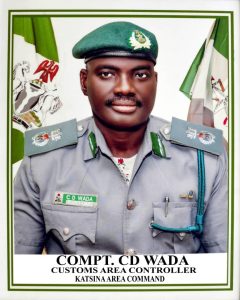 These seizures were recorded in only four weeks, from April 1, to Wednesday April 27, 2022.

This remarkable performance is coming just one month after the same Command made massive seizures of contraband worth millions of Naira through its anti-smuggling drive within the border communities in its area of responsibility.

Addressing Journalists in Katsina State during a press conference, the Customs Area Controller (CAC) of the Command, Compt Wada Chedi said the formation is increasing its surveillance by the day to thwart illicit trade within the State.

Speaking further, Compt Wada, who is uncompromising in his enforcement duties warned strictly that the ban on export and import of contraband remains in place despite reopening of Jibiya border.

He emphasised :
“Contraband must not be imported into our economic environment,
because the Federal Government aims at making the country self-reliant in local production.

“We are very vigilant and will intensify surveillance on all the borders, as well as other routes to ensure total compliance with the directives from government”.

Apparently, by now smugglers sabotaging the nation’s economy in Katsina State must be counting their losses, as Compt Wada and his team are leaving no stone unturned in seizing prohibited items coming into that axis through the  back door.

More so, their records of anti-smuggling operations are unprecedented in the  State and usually presented on monthly basis since Compt Wada  came on board.  Katsina Customs Command under the leadership of  Wada has rattled die-hard smugglers to a stand-still.

The items seized were displayed in the open before reporters who attended the briefing.

Compt Wada is among the newly promoted Officers decorated by the Service recently.  He was elevated from the rank of a Deputy Comptroller (DC) to  Comptroller of Customs. His elevation has been described by many maritime stakeholders and officers as promotion well deserved by merit of hardwork, dedication and total commitments to the Service.