The Assistant Comptroller General of Customs, ACG Modupe Aremu (Mrs), the Zonal Coordinator of Customs in Zone ‘A’, has said that Customs modernisation will enhance border surveillance within the South West and other regions across the entire country.

She emphasised that the top Customs management gives priority to issues of border monitoring in line with the policy of Federal Government to protect national security of the nation.

The Zonal Coordinator, gave these details in interview with Journalists during the decoration of newly promoted senior officers in Zone ‘A’.

She explained that the Service is working tirelessly to ensure full automation of Customs processes, such that the borders will be monitored electronically.

Her words : “We are working towards complete automation.
We will have drones as well as area surveillance, which will go a long way in securing the borders effectively against illegal activities.

ACG Aremu also applauded the Comptroller-General of Customs, CGC Hameed Ibrahim Ali for regular promotion of officers across all formations of the Service, as well as improved welfare provisions given to encourage greater commitments.

ACG Aremu, who described the decoration exercise as unique and remarkable called on beneficiaries to double their efforts, in order to justify the confidence reposed on them by the Service.

She advised promoted officers to always follow the right procedures in carrying out their statutory functions, be disciplined and keep integrity at all times.

In her remarks, Compt M M Tilley-Gyado (Mrs), promoted from Deputy Comptroller to the rank of full Comptroller of Customs expressed great appreciation to the Service management for finding her worthy of such honour.

Compt Tilley-Gyado, enthused :
“I thank the Almighty God and the CGC for making this possible. After 33 years in the Service, I am finally wearing this rank, I will continue to do more for the Service. I have been well tutored and will be able to deliver on any assignment given to me”. 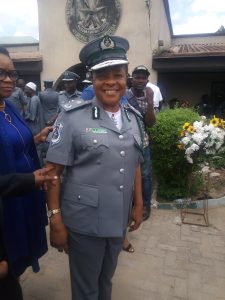 Also speaking, the Deputy Commandant of Customs Training College, Ikeja, Lagos, Mrs Abosede Anthony, elevated from the rank of Deputy Comptroller to full Comptroller of Customs, thanked CGC Ali and his team for the promotion.

Mrs Anthony known to be hard working and disciplined at various capacities she served before being posted to her current department,
described the exercise as transparent and based on merit.

She encouraged officers who didn’t get the promotion this time to persevere and remain committed in doing their work.

Observation at the scene :
Our Correspondent noted that the decoration exercise was not just about the ceremony, as one would have expected.
In their typical style of working round the clock, ACG Aremu began the day with official assignment along with Area Controllers under her watch in close-door zonal meeting. In fact, the Zonal meeting took more time than the ceremony itself, as the meeting ended by noon, after which the decoration followed briefly.

However, it was a joyous occasion, as colleagues and relatives of promoted officers waited patiently to celebrate with their loved ones. The programme ended in group photographs and cutting of the cake.