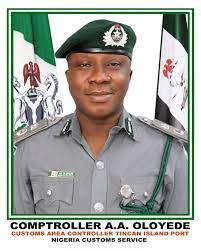 Apparently, the maiden press conference, organised by TinCan Island Port Command of Nigeria Customs Service (NCS), to showcase its activities in the first quarter of 2022 had come and gone; but the memories and outstanding moments of the event will linger for long in the minds of participants, who graced the occasion.

For news breakers, it was an opportunity to get front page reports. For investigative Journalists, it was the right time to get exclusive stories on controversial issues in the port industry, especially on container flying from the ports.
For some inquisitive maritime Journalists, it was a golden opportunity to drill Compt Adekunle Oloyede, who is highly skilled in Customs operations, in order to tap from his fountain of knowledge.

Certainly, the programme was a huge success. Compt Oloyede, who is the Customs Area Controller (CAC) of TinCan Command, presented an impressive score card on revenue collection of N135.4 billion, N56.2 billion export trade facilitation and over N1billion seizures on anti-smuggling operations, from January to March, 2022.

The second segment of the programme was for questions and answers, which paved the way for open interaction among Journalists and the CAC, who appeared ready and well prepared for the day.

In fairness to Compt Oloyede, he
satisfied the curiosity of different categories of maritime Journalists who attended the conference, as he tackled all the questions asked.

Thus, the conference took a new dimension, when inquisitive maritime Journalists asked him the position of his Command on Vehicle ldentification Number (VIN) valuation policy; an issue, which sparked serious controversy and furore among clearing agents just few weeks ago, the same period Compt Oloyede assumed duties at TinCan Port.

That particular question brought about what could be described as a real classroom lecture.
In fact, it was a moment of absolute silence in the conference room, as Compt Oloyede gave detailed explanation on VIN valuation as a concept that is acceptable globally.

He expanded the scope of VIN valuation as it relates to Customs automation and the use of artificial intelligence. He urged freight forwarders to embrace it, saying the world is now leveraging on innovation and technology for optimum economic development.

That was not all.
The CAC further highlighted the economic benefits of VIN valuation and the need for stakeholders to accept the policy in all ramifications.

More so, the lecture shifted from the conference room to the terminal where the seized items were displayed.
At the terminal, Compt Oloyede explained the difference between prohibited items and items under absolute prohibition list.

Compt Oloyede, who spoke like erudite scholar, also gave examples of items that constitute security threat to the nation, pointing at the seizure of 8 containers of machetes imported into the country without End-User-Certificate. He identified items that can endanger the health of the citizens, pointing at
48,850 rolls of cigarettes; 23,800 tins of sodium bromate- baking powder,. among others

The tour of the terminal ended in another round of interview with electronic media outfits, as the CAC showcased 6 exotic cars infused into the list of items approved for release but uncovered through intelligence.

Our Correspondent, who was at the scene gathered that Compt Oloyede, is a Prince from Osun State. He had his primary and secondary education in record time.
He is also a graduate of Engineering.

He is articulate and highly cerebral. He joined Customs in 1990 and has served at various capacities. He worked at Federal Operations Unit (FOU), as enforcement officer. He served as DC revenue, Onne Port, where he changed the paradigm in revenue collection for the Command. He equally served as Controller of ICT/modernisation Unit, among other positions he held before being posted to head TinCan Command..

Compt Oloyede is a certified WCO facilitator. He has participated in many important Customs assignments on ministerial panels. He has done many courses in risk management and leadership.

He assumed duties at TinCan Command recently in the heat of the mass protest by importers/agents on VIN valuation policy. He was able to calm the situation through dialogue with stakeholders.