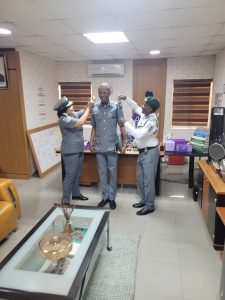 The Newly promoted Deputy Comptroller of Customs, DC Inuekim Eyo is an officer with outstanding passion for public service. Known for hard work and resilience, he has demonstrated unwavering loyalty, commitments and dedication to Nigeria Customs Service (NCS) in various areas of responsibilities.

His assiduousness, tenacity in carrying out his statutory duties at every Command he works, stands him out at all times.

At present, DC Eyo is the
O/C Valuation, Classic Marine Services Terminal 111, a post he held as Assistant Comptroller of Customs before his promotion.

Some officers close to him on the line of duty, described him as reliable and highly dependable, especially in handling official assignments. As such, his current promotion to the rank of DC is seen as promotion well deserved; and a reward for hard work based on merit of his performance.

Suffice to say that his selfless Service to his father-land and remarkable performance contributed to why the Customs Management found him deserving of the latest promotion. 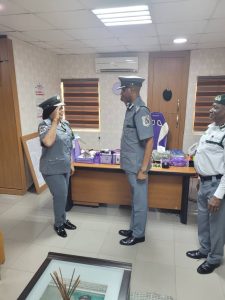 For instance, the Deputy Comptroller-General of Customs, DCG Talatu Isah also found him worthy to be the first Officer in Charge of the new Bonded Terminal, where he used his wealth of experience to open the Valuation Unit, commenced operations and stabilised activities in line with the standard practice.

This feat is made possible due to close mentoring and standard procedures set out by DCG Talatu Isah, who has a sting for success and determination for maximum revenue generation for the Government, which has impacted greatly on overall performance of the Service.

Thus, it’s on record that this officer gentleman has served as Staff officer, TinCan Island port Car park “C” ( Five Star Shipping company)
OC TICT gate ( TinCan Island port Second gate), from where he was promoted to Assistant Comptroller of Customs and transferred to Tarrif and Trade. Later, he was deployed to Valuation and posted to Clarion Bonded Terminal where he worked as assistant to Deputy Comptroller Pam DC.

Following his diligence and uncompromising attitude at work, he was posted to Oyo/Osun Command as Officer in Charge of Valuation, later Post clearance Audit combined.

More so, Deputy Comptroller Inuekim Eyo is an astute Revenue officer, thorough and meticulous. These qualities spotted by the DCG earned him the posting as Officer in Charge of valuation, Michelle 11, Duncan and Stallion motors Bonded Terminals.

Steadily, he moved to PTML as Post Clearance Audit ( PCA ) Officer, where he worked under DC Magaji R ( Mrs ).
It was from that Unit, he was found competent and befitting to be posted and charged to open and operate Valuation unit of the Service, from where he got his present Promotion to the rank of Deputy Comptroller of Customs.

DC Eyo after the decoration with his new rank applauded CGC Hameed Ibrahim Ali and his management team on the on-going Customs reforms and  prompt promotion of officers.

This brilliant and resourceful officer has zero tolerance for lateness and lack of commitment to duties, no wonder he is reputed to be very early comer to work right from his days in Onne Port Command as the Customs Public Relations Officer for twelve selfless years, with a record of serving 13 Customs Area Controllers, which includes Comptroller, Asakome, Adegun, OTERI, Magaji Mohammed ( Retired) DCG John Atte, Suliemam, Dan Ugo and others.

DC Eyo is very intelligent but unassuming.  He is a fluent speaker with a good height and strong character. When he was in the public relations unit of Customs, he worked tirelessly and protected the image of the Service strongly.

DC Eyo Inuekim is a Knight of John Wesley ( Methodist Church Nigeria), the President, Fortune Club International of Nigeria. He is married to Lady Ime Eyo Inuekim. The union is blessed
with four promising Children,
two boys and two girls.

More pictures taken during the decoration 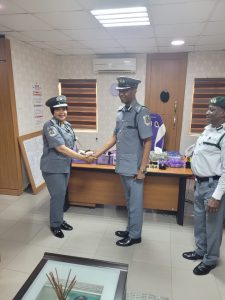 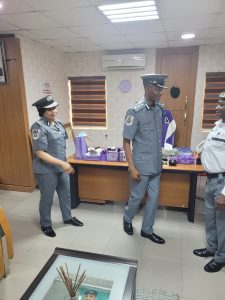