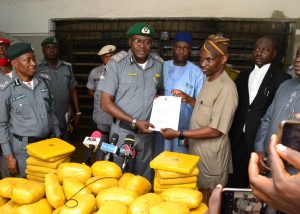 It was yet another milestone recorded on the line of duty by the Customs Area Controller (CAC) of Ogun 1 Command, Compt. Bamidele Makinde fsi mni psc+, as he handed over large quantities of Cannabis Sativa worth N102, 848, 768,00 million –  (approximately N103 million) to National Drugs Law Enforcement Agency (NDLEA).

The hard drugs intercepted by Compt Makinde and his team through credible intelligence were officially handed over yesterday to the State Command of NDLEA.

Speaking during the programme, which took place at Customs office in Abeokuta, the CAC stressed that the handing over of the seized items was in line with respect for each Agency’s statutory functions.

Compt Makinde, who harps on greater inter-agency collaboration added :
“The handing over of these large quantities of dangerous drugs becomes imperative to further strengthen the synergy between Customs and NDLEA.

Expressing his strong determination to work in tandem with the vision of the Comptroller-General of Customs, CGC Hameed Ibrahim Ali, the CAC emphasised :
“With approval by the CGC, we are handing over intercepted Cannabis Sativa of 319 sacks (raw), 476 units wrapped (book size) and 96 wrapped coconut size, with street value of N102,848,768.00 million, to Mr Ishaku Yusuf Kwajafa, Commander of Narcotics, NDLEA, Ogun State Command, Abeokuta”.

Speaking further, Compt Makinde disclosed that the items were seized by his Command within four months he assume duty.

Observation at the scene :
It was observed that the hard drugs were
subjected to a test before Journalists by NDLEA officials, using the United Nation’s testing kits to ascertain the originality.