Customs in Katsina State clamps down on smugglers

It is a tough moment for smugglers operating within the border communities in Katsina State,, as Compt Wada Chedi and his team are clamping down on economic saboteurs within that axis.

Compt Wada Chedi, who is the Customs Area Controller (CAC) of Katsina Command of Nigeria Customs Service (NCS), is using credible intelligence to outsmart illicit traders in Katsina. And his modus-operandi has yielded positive results, as shown in massive seizures recorded by the Command.

For instance, from February 1 to March 30, 2022, the Command through its anti-smuggling network made seizures worth over N42.7million in Duty Paid Value (DPV).

The items intercepted include
vehicles worth over N10,935,000; foreign rice smuggled into the country through the borders; vegetable oil, Premium Motor Spirit (PMS) commonly known as petrol  and other items worth N31,793,850, with total DPV of N42.7million.

That was not all.
The CAC also revealed that on March 23, 2022, at about 2015 hours, the Headquarters Patrol Team ‘A’ apprehended Mr Sirajo Jelami Abdulkadir, who claimed to be a serving Police Officer. 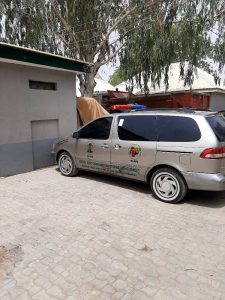 “Other items found with the suspect include Nigeria Police ballistic jacket, handcuff, an Assistant Superintendent of Police rank badge and tear-gas. The suspect, along with all the exhibits, excluding the rice, spaghetti, macaroni and the vehicle were handed over to Nigeria Police, Katsina State Command for further investigation to ascertain his claim of being a Police Man”.

However, these latest seizures are parts of numerous anti-smuggling feats recorded by Compt Wada as the CAC of Katsina Command.
Wada, who is highly knowledgeable and skilled in Customs operations has displayed doggedness and tenacity in the fight against smugglers in his area of responsibility.

His records of anti-smuggling activities presented almost on monthly basis are the most spectacular in Katsina State, which is also known to be a volatile terrain when it comes to illicit trade.