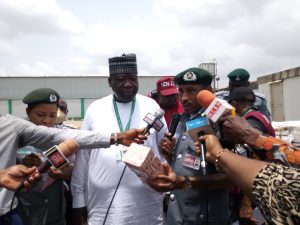 With this whopping sum raked in within just one month, it shows that the revenue collection at MMAC is in geometrical progression.

Speaking during the handing over of drones and Military hardwares seized by his Command yesterday, Compt Dangaladima revealed :
“From March 1 to 29, we raked in the sum of N6,690,005,148.78 billion and we are sure of 7billion by 31 of this March; as against N5.1billion collected the same period in 2021”.

He continued :
“We are also handing over 315 packages of various types of non-compliant pharmaceutical products, valued at N310,240,458.00 to National Agency for Food Drug Administration and Control (NAFDAC), in accordance with the extant laws governing Agencies and their
responsibilities, as well as inter-agency cooperation.”

Compt Dangaladima explained :
“The Tramadol tablets (225mg) were
seized because they are above the permitted threshold by law in Nigeria, while Dry Khat is totally prohibited. The non-compliant pharmaceutical products were seized because they are suspected to be fake drugs without NAFDAC registration/approval certificates.

The Area Controller enthused :  “I cannot possibly end this speech without appreciating the dutifulness of my officers and men in this Command, including our stakeholders and the seamless cooperation of other security Agencies in MMAC.

“We are headed for the best by the grace of God, with sustenance/improved synergy that we enjoy in the Command presently.  We are poised to bring about a safer, saner Nigeria and more revenue for government, in total compliance to the directives of the Comptroller-General of Customs CGC Hameed Ibrahim Ali, for economic growth and development.’

His words :
“The officers and men of MMAC are duty bound to ensure that the set objectives
of the Service are achieved. In
line with this, they work assiduously round the clock and in synergy to come about this proliferation of seizures in the Command. We at M.M Airport Cargo, place the security of this Nation and good health of the citizenry as topmost priorities: even as we discharge our statutory responsibilities as Customs officers.”