* Items include hard drugs, petrol, 9 trailers of rice; others The mind boggling seizures, which include 133 sacks – 181 wraps (book size) of Cannabis sativa; 9 trailers  of rice; 18 units of vehicles – comprising of 13 units means of conveyance and 5 units of foreign but used vehicles (Tokunbo), including 2018 model Range Rover were displayed in the open before Journalists.

In fact, with these large quantities of seizures, Compt Makinde and his enforcement officers have inflicted severe financial losses on die-hard smugglers sabotaging the nation’s economy. By now, these illicit traders must have been counting their losses in illegal venture.

Most outstanding are fearlessness and operational intelligence brought to bear by Compt Makinde and his men in making these seizures at Idiroko border known to be a very volatile terrain. This rattle anti-smuggling strategy deployed by the Command must have sent a strong warning signal to smugglers that a tough time awaits them at Idiroko, the border between Nigeria and Benin Republic. Addressing reporters in his maiden press conference, the CAC revealed that the massive seizures with a total Duty Paid Value (DPV) of N143.9million were made from February 9, 2022 to March 21, 2022.

His assertions :
“Ahievement of the aforementioned was due to strategic enforcement measures and effective use of Intelligence put in place by the Command.

“We appreciate the collaborative efforts of our sister agencies in the fight against smuggling and seek for continuous support. We also pledge to operate an open door policy to enable easy access to our office. This aims at ensuring efficiency and effectiveness in implementation of the Federal Government fiscal policies”. 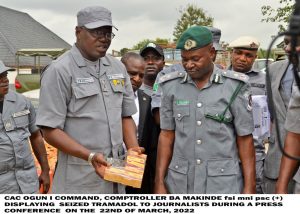 He went on :
“Permit me to use this opportunity to appeal to parents and guardians residing in the border communities to prevail on their wards and youths to desist from criminal activities, such as smuggling and attack on Security operatives, as well as Government assets. Compt Makinde pointed out :
“It is important to note that activities embarked upon by the Command are  patriotic duties in the interest of national security and economic wellbeing of Nigeria.  Customs operatives in observance of the rules of engagement will continue to carry out their legitimate duties as prescribed by the law.” He enthused :
” We thank the Community leaders and other Government Agencies showing concern and collaborating with the Service for their continuous support. We also appreciate the Press for being objective in reporting the challenges faced by officers on the line of duties” .