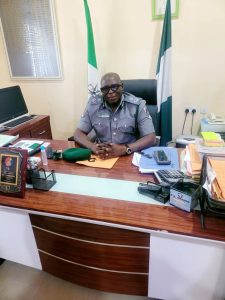 Compt A. M. ADAMU has taken over the leadership of Niger/Kogi Command as the new Customs Area Controller (CAC), following the latest posting by the Service Management.

The new CAC is taking over from Compt W. A. DAPPA one of the largest Commands of Nigeria Customs Service by land mass.

In a brief handing and taking over ceremony, which took place in the CAC’s office, the out-going Area Controller, Compt. WA DAPPA welcomed his friend and colleague Compt. AM ADAMU to Niger/Kogi Area Command, congratulating him on his new appointment.

Also, Compt. Dappa thanked officers and men of the Command for the cooperation accorded him, urging them to give even more to the new CAC.

His words to Compt. Adamu :
“Niger/Kogi Area Command is a place to work as a COMPTROLLER in Nigeria Customs Service”.

Compt ADAMU in his response thanked the out-going CAC and commended him for his laudable feats. He promised to consolidate on the achievements of Compt Dappa.

Speaking further, Compt ADAMU called on officers and men to accord him same cooperation they gave his predecessor, stressing that discipline will be his main concern, as anti-smuggling activities shall be pursued vigorously. 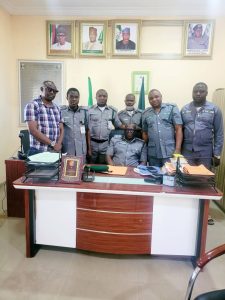