* Intercepts 96 trailers of foreign rice, others

The Customs Area Controller (CAC) of Ogun 1 Command, Compt Dera Nnadi and his enforcement team have made remarkable performance in anti-smuggling drive, which resulted in mind-boggling seizures of over N1.5 billion
recorded by the Command for the period under review.

Most impressively, the Command recorded tremendous incrcease in the quantities of seizures made in January, 2022.

Addressing reporters at Idiroko, Compt Nnadi attributed the successes recorded by his Command to aggressive stakeholders’ engagement, deployment of intelligence in all operations across the State, rejigging of the Command’s operational structure, improved motivation of officers by the Service Management, as exemplified by the new vehicles allocated to the Command recently, provision of accommodation in various out-stations of the Command, as well as
improved discipline and total dedication to duty by officers of the Command.

He disclosed : “Items seized from
January to December 2021 include Foreign parboiled rice – 57,758 bags of 50kg each (equivalent to 96 trailer loads); used vehicles – 10 units; means of conveyance and foreign used – 231 units.”

He added : “In January, 2022 alone, seizures recorded include foreign parboiled rice – 3,008 bags of 50kg each (equivalent to 5 trailer loads); Vehicles –17 units used as means of conveyance. The total for January 2022 is 17 units, with a grand total of 258 units for the period under review. 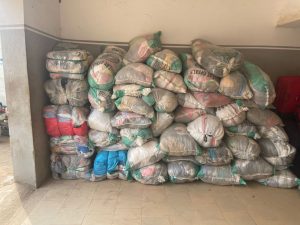 He pointed out :
“However, these achievements so far, were not made on a silver platter. On several occasions, our officers while performing their lawful duties came under harassment and attacks from the dare-devil smugglers and their supporters, who used pump action rifles, AK47 rifles, local charms and other dangerous weapons to attack, kill and maim officers.”

His words :
“We wish to reiterate that the sustained attack on operatives of Customs and other sister Agencies will not deter us from continuous performance of our legitimate duties in Ogun State.
Nevertheless, we wish to put it on record that there is decrease in these attacks on Officers of the Command in the last four months and wish it is sustained, as we improve on our relationship with the good people of Ogun State.

“The Command will continue to educate the public on social/economic implications of smuggling, as well as performing statutory functions of enforcing compliance in line with government fiscal policies. We are appealing to parents residing in border communities to prevail on their wards and youths to desist from the criminal acts of smuggling and attack on Security agencies”.

News Inquest :
Our news inquest revealed that Compt Nnadi is a Customs officer with strong passion for the Service.
He is task-oriented and highly committed.
What stands him out always is his in-depth knowledge of Customs operations. There is no question on Customs procedures that Compt Nnadi cannot answer, when on spontaneous assessment.  When it comes to revenue and trade facilitation aspects he is highly knowledgeable. In terms of enforcement, he is a guru. His record when he served as DC Enforcement at TinCan Island Port Command remains one of the best and unbeatable till today.