By now economic saboteurs specialised in smuggling petrol across the borders must be counting their losses, as Seme Area
Command of Nigeria Customs Service (NCS), has initiated offensive patrol against smuggling of petroleum products along the creeks within Seme and Badagry axis.

This renewed effort led to interception of large quantities of petroleum products packaged in sacks on Wednesday, 26 January 2022.

The aforementioned items were successfully evacuated to the Command premises where an examination was conducted. One thousand and sixty-five *(1065)* jerrycans of petroleum products – thirty *(30)* litres each, equivalent to thirty one thousand, nine hundred and fifty *(31,950)* litres were discovered with Duty Paid Value (DPV) of N10million.

Accordingly, the Customs Area Controller (CAC) of the Command, Compt. Bello Mohammed Jibo stressed that the offensive crackdown on activities of petroleum products smugglers is with a mission of getting them arrested wherever they are.

He reassured that the Command will continue to make life uncomfortable for unpatriotic Nigerians trading illegal businesses in the area.

Recall that this massive seizure of Petrol worth over N10 million by Compt Jibo at Badagry-Seme creeks is about the fourth recorded in the last few weeks. Obviously, Compt Jibo and his enforcement officers are giving die-hard smugglers a tough time at Seme border community.

In the same vein, officers of the Command while on their routine stop-and-search duty along Seme – Badagry Expressway intercepted eleven (11) parcels of substance suspected to be Cocaine in a Ford Transit bus conveying religious books. One suspect has been arrested in connection with the seizure.

While showcasing the seized Cocaine , Compt Jibo explained that the substance was intercepted along Seme- Badagry Expressway at about 09:00 hrs on Sunday 23 January 2022.

Consequently, the substance was subjected to test and verification by the National Drug Law Enforcement Agency (NDLEA), as well as National Agency for Food Drug Administration and Control (NAFDAC) and was found to be cocaine weighing *11.913kg*.

The street value of the Cocaine was estimated to be three billion, nine hundred and sixteen million, six hundred and twenty-four thousand, one hundred and forty-seven Naira (N3,916,624,147.00 billion.

While appreciating the cooperation of sister agencies and relevant stakeholders at Seme Border, the CAC reiterated the commitment of his Officers and Men in enforcing government fiscal policies for the overall national growth and development.

Below are pictures taken while showcasing the seizures : 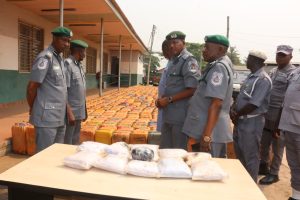 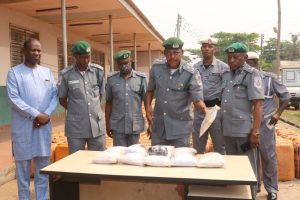 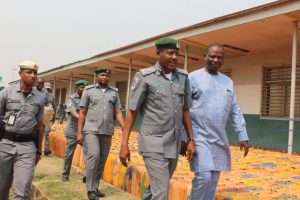