The unveiling of 18 creeks patrol boats, which took place in Port Harcourt is one of the giant strides recorded by Nigeria Customs under the leadership of CGC Hameed Ali, in the administration of President Muhammadu Buhari.

Most outstanding is the fact that, the new patrol boats are handed over to Compt Joseph Ndarni, the Customs Area Controller (CAC), of Eastern Marine, who is an enforcement guru with the might and doggedness to comb the creeks and waterways in Eastern Marine axis.

With these new tools, tough time awaits die-hard smugglers operating within the Eastern creeks, as Compt Ndarni and his team are fully equipped to thwart nefarious activities of illicit traders working again government’s effort in growing the nation’s economy.

Unveiling the patrol boats before top government functionaries, maritime stakeholders, security agencies, Customs officers and the media, CGC Hameed Ali asserted :
“The addition of these boats to the Service Marine arsenal at a time when more smugglers are running away from the heat on land to water is simply the right thing to do. This event no doubt marks the beginning of a renewed offensive against those who chose creeks and waterways as safe haven for their illegal trade.

“The 18 creeks patrol boats, consisting of 9 logistics support boats and 9 gun boats, which parts are armored, should send clear signals to the criminals that the game is up. Unlike before, we now have boats with flat bottoms that can access the creeks even when the water has receded”.

The Customs boss pointed out :
“In-line with Executive Order on Local Content of 2017, NCS tapped into the ingenuity of a Nigerian Company, SEWA to design, construct and build these edifices. As you can see, these boats are not only built with our weather and circumstances in mind, they can compete with similar ones built anywhere in the world.

“The relationship between NCS and SEWA represents excellent examples of what Nigerians can achieve when we come together.
I therefore commend SEWA for delivering on their promise and have no hesitation to recommend them to individuals or organisations that need what they are capable of producing”.

His words :
“As we commission these boats which will be deployed for the Southern waters, (the Eastern and Western Marine Commands), I urge our Marine Operatives to use them judiciously in the interest of the nation”.

He added :
“Let me state here that even with the best of working tools, NCS efforts will not yield maximum output, If Nigerians do not give us needed cooperation.
I therefore call on well-meaning individuals and organisations to give the Service credible information that will enable interception and seizures of smuggled items.

“To members of the forth estate of the realm, the media, I thank you for your continuous support and urge you not to relent on your valuable job of informing, educating and entertaining the public. Together, we will succeed”.

In his remarks, Compt Ndarni thanked CGC Hameed Ali for the new work tools and other logistics support for his Command.
He warned illicit traders in Eastern Marine to desist, as the Command will not hesitate to unleash its anti-smuggling onslaught on economic saboteurs in its area of responsibility.

His words :
“Eastern Marine Command is on top of the game now, smugglers at Eastern waters beware”.

Compt Ndarni known for his no-nonsense approach in anti-smuggling operations has what it takes to outsmart smugglers on Eastern waters. He has served the Service at various capacities with wealth of experience in Customs operations. Before his deployment to
Eastern Marine, he served ai Seme Border Command, the busiest borderline between Nigeria and other African countries. 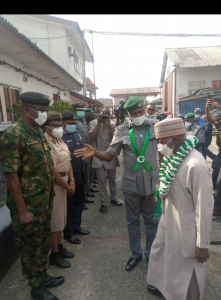