The Customs Area Controller (CAC), of Seme Border Command,
Compt Bello Mohammed Jibo and his enforcement team are giving petrol smugglers a tough time at the border communities between Nigeria and Benin Republic, with reccurring seizures of petroleum products.

Just two days ago, precisely on the early hours of Wednesday January 12, 2022, the team while on routine patrol along the creeks within Seme and Badagry axis intercepted another large quantities of petroleum products in sacks.

Compt Jibo while showcasing the seizure commended the doggedness, patriotism, dedication and high level of professionalism exhibited by his men.

He added : “The new Landcruiser patrol vehicles (Buffalo) provided by the Service aided the operations of the Command. Before now, some of the creeks and beaches were not accessible; but now with the aid of this Buffalo vehicles we are able to access everywhere freely”.

The CAC appreciated the Comptroller-General of Customs, CGC Hameed Ibrahim Ali and his management for equipping the Command with operational tools.

He stressed : “In as much as the smugglers continue with their unpatriotic acts, we are ready to match them. The seizure of Petrol is a routine activity in which the tempo will be sustained.”

Recall that Seme Customs Command in the last few weeks has made seizures of smuggled Petrol worth millions of naira. This spectacular seizure of N6.9 million worth of fuel is about the third of such seizures within the last one month. 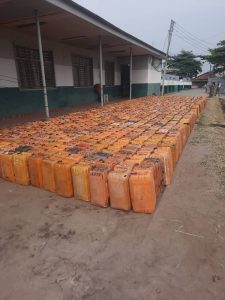 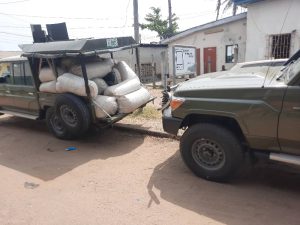 The seized petrol being evacuated by Seme Customs :