* Steps up patrol surveillance on waterways

The Western Marine Command of Nigeria Customs Service (NCS),. has maintained its anti-smuggling onslaught against economic saboteurs on waterways, as its operatives seized 21,625 litres of Premium Motor Spirit (PMS), commonly known as petrol through timely use of credible intelligence.

Displaying the seizure before newsmen yesterday, the Customs Area Controller (CAC) of the Command, DC Enonche Ochiba disclosed that the large quantity of smuggled Petrol was seized at Ashipa Beach, along Seme Coastal Border area by Officers/Men of Coastal and Harbour patrol (Bar-Beach)

The Area Controller explained that the 21,625 litres of smuggled fuel fully loaded in 865 jerrycans were secured and evacuated successfully to their base. 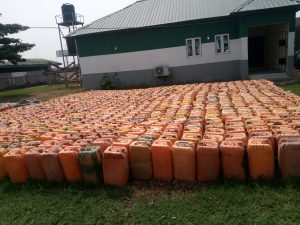 He said :  “I will like to use this opportunity to call on members of the public to provide operatives of the Service with genuine information that would aid the fight against smuggling in our Country. We are all aware that the Federal Government is paying huge amount of money in subsidizing the PMS for the benefit of its citizenry, but the smugglers are sabotaging the efforts of government for their selfish gain, to the detriment of all Nigerians”.He informed :  “The Officers/Men of the Command are equipped in the fight against smuggling along the waterways as evident by the record of Seizures in the year 2021. The Command from January to date made several seizures with Total Duty Paid Value (DPV) of N2.2billion, as against N1billion recorded the same period in 2020. This represents over 100% increase.”

The CAC enthused :  “These records are strong indications that the operatives of Western Marine Command are working tirelessly to combat smuggling on the waterways. The record of seizure for the year 2021 is the total of seizures from 2017 to 2020 for the Command.”

His assertions :  “To those smugglers, we are aware of your plans during the yuletide season, I want you to know that our operatives are vigilant and on patrol duties to tame the scourge of smuggling activities and other vices on the South Western waterways and will leave no stone unturned until you are apprehended and prosecuted.

” I want to use this medium to appreciate the efforts of other sister agencies and patriotic Nigerians for their contributions in providing information in our fight against smuggling. Let me on behalf of the Officers/Men of Western Marine Command appreciate CGC Hameed Ali and his management team for their motivation and support given to the Command in the discharge of its statutory responsibilities.

“We will continue to discharge the duty vested on us and will not rest on our oars in curbing the menace of drug traffickers and smugglers on waterways and creeks.

Spectacular seizures made by the Command in 2021 :
As amphibious arm of the Service, Western Marine Command under the watch of DC Enonche Ochiba has recorded spectacular seizures in 2021.
Notable among them are seizures of Heroine, Cannabis Sativa (Marijuana), foreign Rice, Expired Drugs, Used Shoes, PMS and other items, even as seven suspects had been arrested in connection with seized hard drugs handed over to the NDLEA for. prosecution.

Recall that precisely on Wednesday September 15, 2021 , DC Ochiba and his team seized expired pharmaceutical products worth N62.3million, along Abumb um-Ojo waterways.
In fact, the drugs had expired since April 27, 2017, about four years before being smuggled into Nigeria but DC Ochiba and his men saved the Nigerian nation from the health disaster of those killer drugs, as they intercepted them on water, thereby preventing the contaminated drugs from entering the local markets.

Most remarkably, the Command also seized bundles of new labels printed by the smugglers to rebrand the expired drugs, in a bid to deceive un-suspecting consumers.

That was not all.
On Friday, August 13, 2021, the Command intercepted Cannabis Sativa (Marijuana), worth over N1.1billion, along Kuramo Beach on high sea.

Thus, DC Ochiba remains resilient and uncompromising in the war against illicit trade on waterways.

Smuggled Petrol seized by the Command :