* Intercepts 24 Containers of charcoal worth N218.7million 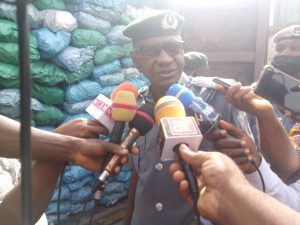 The officers through hard work, dedication and resilience collected a whopping sum of over N32.7billion from January to November 2021, which is unprecedented in the history of the Command.

The team also thwarted activities of illicit traders with the seizure of 24 containers of charcoal, valued at N218.7million meant for export.

Most outstanding is the assiduousness brought to bear by Compt Swomen in recording these feats, despite
constraints of poor access and exit roads around the Command militating against their operations. 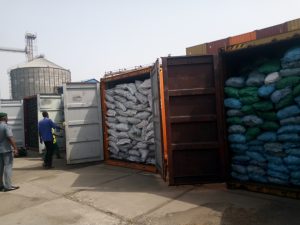 Addressing Journalists during a press conference yesterday, the CAC said :
“The Command generated N32.7 billion from January to November 2021 as Customs duty and other charges, surpassed N19.7 billion the Command collected during the same period in 2020.

“The N32.7 billion collected represents 65.6 percent increase on the Command’s total collection for the previous year – 2020. By the month of August 2021, the Command had already exceeded the total revenue collection from January to November of 2020.

“For the first time in the history of the Command, it collected N4.3 billion in one month (July) 2021, more than 200 percent increase in revenue compared to July 2020 when it generated N1.6 billion.

Compt Swomen, who is result – oriented and unassuming, pointed out :
“These feats and several others were made possible notwithstanding the logistics constraints of access and exit, worsened by the deplorable road network to the Command militating against our operations.”

While taking Journalists round the Command to see the seized containers of charcoal, the CAC said that the
Federal Government through its fiscal policy has placed embargo on unprocessed wood and its derivatives for export.

He stressed :
“As you can see here,
these are containers of charcoal for export. the bags of charcoal have no company name and office address for verification. No genuine documentations for the items. This shows clearly that the transaction was a smuggling attempt by economic Saboteurs.

Speaking further, Compt Swomen enthused :
“These successes are attributable to a number of factors including synergy between the Command and all relevant government agencies, prioritisation of trade facilitation, re-energising the Command dispute resolution mechanism, insistence on proper physical examination, regular stakeholders’ engagement and discipline among our officers.”

OBSERVATION AT THE SCENE :
Our Correspendent, who witnessed the unveiling of the massive seizures of charcoal observed that the items were well packaged in different bags. Some bags were white, blue, green and others black in colour. Some even appeared like bags of rice but the content was charcoal. Also, there were no names or contacts on the items to trace the real owner of the consignment.
Compt Swomen was accompanied by the DC Enforcement, A. A. Mohammed, and other senior officers of KLT Command.

* * * This is the first segment. We will bring you more reports on activities of KLT Command in our subsequent news bulletin.