*After 30 years on the saddle

* He came, saw and conquered

His unique names added tremendously to his success story.
As Victor- he is victorious in his career !
As David – he defeated Goliath-like smugglers during anti-smuggling operations. !

After 30 years on the saddle, one can rightly describe him as a conquerer, because he came, saw and conquered in all ramifications.

Victor Dimka conquered smugglers on land, in the forest and creeks. He is courageous and fearless.

His record of anti-smuggling feats while in Federal Operations Unit- FOU Zone ‘A’ Lagos, as the Customs Area Controller- CAC, remains one of the best and most outstanding in the history of Customs Service.

In fact, as a junior officer, Dimka gave die-hard smugglers real tough time, because he drew the battle line even in the creeks.

If you meet Compt Dimka for the first time, don’t let his gentle look deceive you …oh !
Well, he is gentle at heart but dogged in chasing smugglers in the bush. Again, he was kind and supportive to legitimate traders but battled-ready for economic saboteurs seeing illicit trade as a means of livelihood.

Fearless Comptroller Dimka, as he is fondly called by some maritime Journalists is a no-nonsense enforcement officer, who would stop at nothing to pursue smugglers even in the most dangerous terrain at creeks.

This enforcement guru while in service had the courage to dislodge even dreaded smugglers who stood on his way during anti-smuggling operations.

*Other impressive parts of Compt Dimka’s diary are his skills, ingenuity, gallantry efforts and assiduousness in carrying out his duties as a Customs officer*:
It will interest you to know that David Dimka didn’t just become so proficient over night.

Like any other officer, he rose through the ranks, received training at various stages of his career and that equipped him to become a competent officer.

Even with the training he got, it was not all rosy for him. As a field officer, he encountered challenges on the line of duty.

Our Correspondent, who has been following the career path of Compt Dimka can authoritatively say that he had very rough moments as well.
One time, he escaped death by a whisker during anti-smuggling operation he led to the creeks. Other times, he risked being violently attacked by un-repentant smugglers while on duty. Though being fearless while on duty, our Correspondent believes that his names – David and Victor also contributed to why he was always victorious in battling smugglers in a courageous manner like young David who defeated the mighty Goliath on the battle-line of Israelites.

*Another unique aspect of his career diary is resilience*: Compt Dimka is tough and uncompromising. His landmark achievements speak volumes at every Command he worked.
He demonstrated this tenacity at various capacities he served in Customs.
From FOU Zone ‘A’, he was posted to Federal Operations Unit – FOU Zone ‘C’ Owerri covering the entire South/East region of the country.
Yet, he performed creditably.

That was not all.
Compt Dimka made enormous contributions to the achievements of Nigeria Customs. He is like a book with many chapters.

Today, the success story of Customs will be incomplete without mentioning his spectacular accomplishments.
After serving diligently in Zone ‘C’, the top Customs Management posted him as the Customs Area Controller to Seme Command, the busiest border between Nigeria and other West African countries. While at Seme border, he built a very strong inter-agency synergy between Customs and other security agencies at the border communities.

Following his comptence while at Seme, he was made the Chairman of all security agencies operating at Seme border then.
From Seme border, he was posted to Customs headquarters in Abuja, where he retired last year as Comptroller Enforcement. 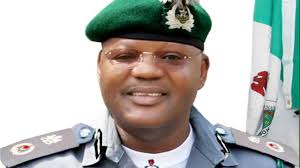