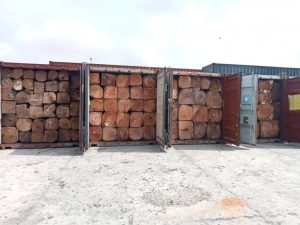 The Coordinator of Nigeria Customs Strike Force in Zone ‘A’, Lagos, Deputy Comptroller Ahmadu Shuaibu and his operations have prevented illegal exportation of large quantities of unprocessed wood and charcoal from the country by unpatriotic individuals.

The team acting on credible intelligence intercepted 61 containers of unprocessed wood and 36 containers of charcoal, even as seven suspects were arrested along with the seizures.

Taking reporters round the government warehouse at Ikorodu Lagos, were the items were displayed, DC Shuaibu disclosed that the 97 containers of unprocessed wood and charcoal are the single largest seizures made by any formation in the history of Nigeria Customs Service.

In the same vein, DC Shuaibu through diligence made recovery of N4.2billion revenue for the Federal Government from Demand Notices (DNs), raised on under-payment for import and export activities within the period under review.

He revealed that some of the seized containers comprised of used clothings, even as he showed a container of motor batteries falsely declared as spare parts, as well as a container of Donkey skin, among others.

Responding to questions on the strategies behind the massive seizures, he commended his operatives for their doggedness and the hard work and officers at the ICT unit

Going further, DC Shuaibu said that some unpatriotic Nigerians are collaborating with foreigners on illegal smuggling of unprocessed woods and donkey skins/ hydes to middle East, to the detriment of Nigeria’s economy. He warned those culpable to desist from this illicit trade, or be ready to face the wrath of the law.

His assertion,:
“We advise illicit traders in their own interest to desist from these illegal activities and embrace legitimate trade, because the more they violate the laws of the land, the more they have us to contend with. We must justify the confidence reposed on us by the Comptroller-General of Customs, CGC Hameed Ali, by protecting the nation’s economy from nefarious activities of smugglers.”