Thirty parcels weighing 32.9 Kilograms of cocaine have been uncovered in Apapa Port inside MV Chayanee Naree, a cargo vessel that came from Brazil

The Public Relations Officer (PRO) of Apapa Command,
Deputy Superintendent of Customs, DSC Abubakar Usman, disclosed this, on behalf of the
Customs Area Controller of Apapa.

“The joint operation was initiated following intelligence about the ship’s content shared by interpol to the various agencies, which necessitated close monitoring of the ship using high maritime domain awareness system.”

He pointed out:
“Headquarters of the NCS had directed Apapa Command to follow up on the ship with other government agencies. This was jointly done for days.

“After meticulously searching the vessel with the aid of sniffer dogs, the suspected substance was discovered and referred to the NDLEA for tests, which confirmed it to be cocaine.

“The vessel, which departed Santos, Brazil on September 19, 2021 and drifted for about a week off the coast of Benin Republic from October I to October 8 2021, when it arrived Nigeria.”

He informed; “Intelligence report obtained from the ship’s captain confirmed that Brazil Customs had earlier intercepted 150kg of cocaine from one of the ship’s compartments when it berthed at Sopep Locker, Brazil on September 19,2021

“The ship berthed under arrest at Terminal C in Apapa where the security agencies did a search on it. ”

The Area Controller of Apapa Command, Comptroller Malanta Yusuf said the Command relied on provisions of the Customs and Excise Management Act (CEMA) sections 49, 50 and 51 to conduct the exercise.

Comptroller Yusuf, who said the discoverd drug has been kept in the custody of NDLEA, commended the synergy and described it as very productive. He added that more search is on-going on the vessel and any additional discovery will be made known to the public.

Picture of the vessel below : 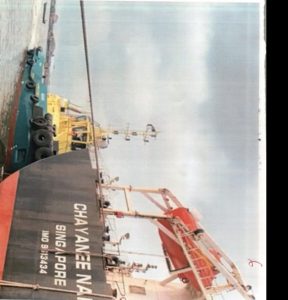 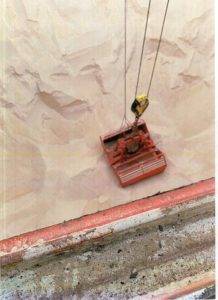 Picture taken during the operation: