This anti-smuggling war culminated in massive seizures made by the Command in just one month. In fact, it was like rain of seizures at Ogun Customs Command, Abeokuta, Ogun State, today, as Compt Nnadi showcased mind boggling seizures made in only one month of assumption in office.

Our Correspondent observed that from the main entrance of the premises to the office building, up to the back side, seized items were everywhere. Also,
contraband items, which include
12 trailer loads of foreign rice, Cannabis Sativa, used tyres, smuggled Petrol, used shoes, poultry products, second hand clothings, vegetable oil and others were seen everywhere at the back side of the premises leading to the barracks.

Among the mind blowing seizures were vehicles used as means of convegance, mini- trucks and Dangote Cement trailer used in concealing large quantities of smuggled rice. Even Journalists who attended the press conference were astonished at the massive seizures recorded by Compt Nnadi and his team in a very short period.

Addressing Journalists in Abeokuta today, Compt Nnadi said; “I ssumed as the CAC on 18 October 2021 to 23 November, 2021, making exactly one month and six days.
In the area of anti-smuggling operations during the period under review. the Command made spectacular seizures of 7311 bags of 50kg foreign parboiled rice, equivalent to 12 trailer loads. It also translates to 365, 550 kg or 365.55 metric tons of foreign parboiled rice.

“The above emphasis is deliberate to show that this quantity of rice, if allowed into the Nigerian market will affect the Federal Government rice policy negatively. Recall that a rice cooperative farm in Ogun State (specifically at Imeko Afon) with the active support of the Central Bank of Nigeria, government and World Bank, just last week harvested 2600 metric tons of paddy rice”.

The no-nonsense CAC pointed out ; “This is a major win for the Command, as we celebrate these farmers, who are testimonies and justification of the Service anti-smuggling effort in support of local rice productions in the country.”

Showing Journalists contraband displayed in the open, he added; “Several other seizures recorded in their various quantities during the same period include: vegetable oil: 12 kegs of 25 litres size, that is 300 litres; vehicles used as means of convegance – 20 , units;
motorcycles used for convegance – 2 units; second-hand clothings – 4 bales of 25kg each and sacks.

Responding to questions on the strategies used in making such unprecedented seizures, Compt Nnadi informed;
“We are deploying massive intelligence and also deploying rules of engagement in all our operations. This has yielded greater successes being recorded on daily basis without casualties”.

He went on. “We have extended our stakeholders engagement to include continuous interactions with critical stakeholders in the Command. To this end, we have been engaging the youths who form the bulk of human capacity asset in Ogun State, particularly at the border areas.

“We have also been engaging the elders of the communities, who in all honesty have a good knowledge and understanding of the challenges of enforcing government policy in the border, especially as the borders remain closed. We are engaging the Royal Fathers, as we appeal to them, to warn their subjects to desist from smuggling and attacks on Customs personnel.

” Let me use this medium to thank them for accepting to continuously help in this direction. We are also reaching out to the State Governor, who is the Chief Security officer of the State in this direction; and the future looks mutually very rewarding for Nigeria Customs Service and the State.”

The CAC enthused ;
“Once again, let me use this opportunity to thank the Comptroller General
of Customs, CGC Ibrahim Hameed Ali and Service management for considering me worthy of not only being promoted to the rank of Comptroller, but for being deployed as the Area Controller of
Ogun I Command.

“This is a conferment of responsibility that I will not take for granted. It is a call for continuous service for which my officers and men with the support of the stakeholders must accomplish to the best of our ability.

“It is in justification of this promise that we are here to share with you the record of our activities in our core areas of revenue generation, anti- smuggling operations and stakeholder’s engagement, especially in ensuring that we strike a balance between trade facilitation and application of
control at a closed border”.

Compt Nnadi further disclosed that his Command received 10 units of brand new Toyota Hilux vehicles.
He thanked the CGC for the new Vehicles, even as he promised to leave no stone unturned in the fight against illicit trade.

His assertions; “May I inform you that for an effective anti-smuggling operations, we thank the Comptroller General of Customs and the Management for their kind consideration in providing these vehicles for the Command.
It is a demonstration of Management support and encouragement to Ogun 1 Command. It is proof of Management commitment to quality service delivery to the nation. This gesture will no doubt enhance our operations and improve our performance”.

On revenue collection, he mentioned; “The Command generated a total revenue of N2.4million during the period under review, which are mainly proceeds of auction sales of seized PMS and scrap metals. It should be noted that government directive on border closure is still subsisting, hence, there is no revenue generated from imports activities”.

Observation at the scene :
Our reporter noted that the seized foreign rice came mainly from Thailand and India in different bags but the same content. 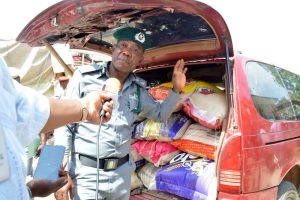