For generations to come, December 16, 2020, will remain indeleble in the history of Association of Nigerian Licensed Customs Agents (ANLCA), the entire maritime industry and Nigeria at large. It was the day ANLCA National President, Hon Prince Tony Iju Nwabunike, conducted a classy and high technology-based election where all members of ANLCA in Nigeria and diaspora voted simultaneously online.

It was indeed a great milestone for ANLCA and election like no other, as members voted online and the results transmitted electronically instantly at the venue. All the figures came in promptly without any discrepancy and the results were announced immediately, even as the new BoT members were sworn in at the same time.

That ANLCA’s Board of Trustees (BoT) election conducted by Hon. Tony Nwabunike in Owerri, Imo State capital, remains one of the most spectacular achievements ever recorded since ANLCA came into existence in 1954.

It is almost a year since that election took place, yet, the memory is still fresh. The outstanding moments, excitements, glitz and ingenuity brought to bear by Hon Tony Iju, in making the programme a huge success are unforgettable.

The ANLCA’s Annual General Meeting and BoT election, which took place at the prestigious Concord Hotel, in Owerri
attracted members from various chapters of the association,
top government functionaries and Journalists who observed the exercise.

It was indeed an epoch making event, as the Executive Governor of Imo State, Hope Uzodinma, his Deputy and other top government officials in his entourage graced the occasion in grand style.
Even Journalists and observers who monitored the election gave Hon. Nwabunike kudos for the transparent manner the election was conducted, something that the Federal Government can imitate in conducting elections in Nigeria.

The programme with a theme; *ANLCA New Normal and The Way Forward* was the best of its kind in the history of the association. Over 1,462 members monitored the exercise online. The conference Hall of Concord hotel was filled to capacity with members of ANLCA from Port Harcourt, Lagos, Idiroko- the border between Nigeria and Benin Republic, Calabar, the Northern States, as well as other chapters across the country.

The exercise was indeed unique, as members who didn’t come physically and those in diaspora participated through Zoom.

Our Correspendent observed that the election was very transparent, well coordinated and generally peaceful, as members voted across various chapters electronically.
Some executive members of ANLCA, who spoke with Journalists at the sidelines of the election showered encomiums on Hon Tony Nwabunike, for his inventiveness in conducting such outstanding AGM and online election.The high point of the programme was the swearing in of new BOT members.

In his remarks, Governor Uzodinma, who was the special guest of honour, scored ANLCA high on its commitment in growing the maritime sector of the economy.

His words, “It gives me great pleasure to be here and the fact that your AGM is taking place in Imo State, where I am the Governor.

“Imo State has become a destination for all progressive minds. ANLCA is one of the oldest Associations in the maritime industry founded in 1954, even before Nigeria got Independence.

“I commend your efforts in moving the maritime industry forward despite challenges in the system.
ANLCA creates more than 15,000 direct jobs and a large number of indirect employment through the value chain of freight forwarding business. ANLCA is an important group that government must support.

“I also commend your National President, Nwabunike for his proactive leadership style in running the affairs of ANLCA. We will continue to maintain our relationship with ANLCA for the overall interest of our economy”.

Speaking further, Governor Uzodinma outlined challenges facing Customs Brokers and freight forwarders in the industry, while calling for reduction of government agencies in the ports, in order to ensure ease of doing business”.

Below are pictures taken during the occasion : 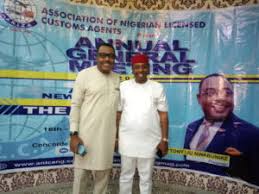 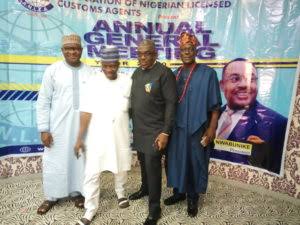 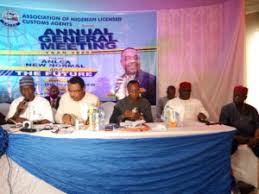