* We will not tolerate false declaration- Says Comptroller Yusuf Malanta

The Apapa Command of Nigeria Customs Service, NCS, has intercepted a container fully loaded with 554 cartons of tramadol capsules (120mg), worth over N223.2 million in Duty Paid Value (DPV).

The tramadol capsules were concealed with 1000 cartons of ceramic tiles and falsely declared by the consignee.

The Customs Area Controller (CAC), of the Command, Comptroller Yusuf Malanta, disclosed these details to Journalists in Lagos.

Comptroller Malanta also said that the tramadol capsules were seized using forensic management system, which he would not disclose to the public.

He revealed that the Command also seized a 40ft container loaded with sacks of mosquito coil products but falsely declared as ground paper and packaging paper bag; seven containers loaded with bales of used clothing and shoes; and one container of unregistered pharmaceutical product (989) cartons of mixagrip tabs, wrongfully declared as Winches and gaskets.

His words :
“At this point, it is worthy to state that the consignments are outrightly seized for breaching the provisions of sections 46, 47 and 161 of CEMA CAP C45 LFN 2004, and provisions of schedule 4 (17) of the Common External Tariff.

“Based on the foregoing, the Command has launched a preliminary investigation into the case, with a view to identifying the consignee for arrest and possible prosecution, in connection with this criminal and unlawful importation.”

Comptroller Malanta informed:
“I am using this medium to assure members of the business community that the Command would increase sensitisation, enlightenment and robust stakeholders engagement for seamless operations, with a view to educating the public on the harmful and destructive nature of these illegal importations

“Apapa Command under my watch would not tolerate such kind of unlawful behaviour from any importer or declarant.”

Giving more details on how the items were seized, the CAC explained that the container laden with tramadol was traced through Intelligence from India to port of Lome, Togo before it was shipped to Apapa seaport where it was intercepted by his vigilant officers.

Responding to question on prosecution of offenders guilty of false declaration, Comptroller Malanta pointed out. “False declaration attracts jail sentence but it must follow due process of the law.

“Our duty as Customs officers is to seize the items, get court order for condemnation of the seizures, while the Court has the power to prosecute culprits.” 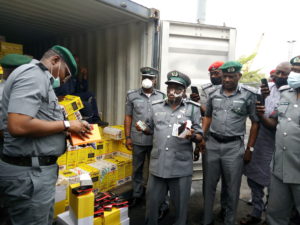 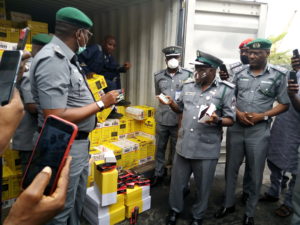 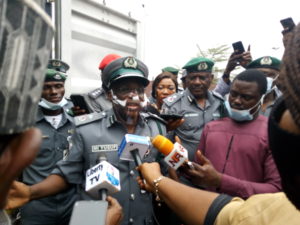