The Customs Area Controller (CAC), Seme Border Command, Comptroller Bello Mohammed Jibo and his men have demonstrated superior intelligence in their operations, as they intercepted 1,294 prohibited items worth over N788.2million in Duty Paid Value (DPV), in 2020.

The team swiftly arrested 15 suspects in connection with the seized items.

The Public Relations Officer (PRO), of the Command, Mr. HUSSAINI ABDULLAHI, made this known.

“In the same vein, 15 suspects were arrested in connection with different crimes during the period under review; of which some were released on administrative bails while others are still standing trial in court.”

His words :
“The above landmark achievements can be attributed to the deliberate policies adopted by the Command and supported by Customs Management under the stewardship of CGC Hameed Ali, appreciable cooperation by sister security agencies, as well as unwavering synergy with the host Communities”.

He went on, “It is pertinent to note that since the pronouncement of policy on partial border closure by the Federal Government, the Command major revenue sources have not been active; hence the only alternative source is fees collected from auction sales of seized PMS and other perishable items.

“As such, the Command remitted  N32.2million into the federation account, as revenue for 2020 fiscal year.

To this end, the CAC appreciates the border communities and sister security agencies for their support, patriotism and cooperation.

He further called on all stakeholders to always put the interest of the Nation above personal drive.

He emphasised, “The Nigeria Customs Service will continue to encourage compliant traders, while sustaining a higher tempo in the fight against smugglers and their accomplices.” 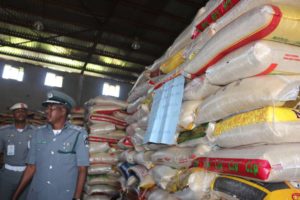 The CAC showing seized items in the warehouse :