The Standards Organisation of Nigeria (SON), has destroyed fake gas cylinders and substandard tyres worth about N300 million.

This is coming only few days after SON seized and destroyed fake gas cylinders in Enugu.

The exercise carried out before Journalists and officials of other government agencies
was supervised by the Director General of SON, Mallam Farouk Salim, the Director, Inspectorate/Compliance Directorate, Engr Obiora Manafa, as well as other officials of SON.

Speaking during the exercise, the SON DG, said that the seized items failed to meet the minimum requirements of Nigerian Industrial Standard (NIS).

His words, “The destruction of these products is necessary because they are not safe.”

According to him, the agency is working hard to check influx of fake and substandard goods into the country.

“We are increasing our surveillance to checkmate influx of fake and substandard goods, while restating our commitment to zero tolerance for substandard products.

“The destruction of these substandard goods is taking place in environmentally friendly manner, because we do not want to pollute the environment.

“Also we must ensure that everything recyclable will be recycled.

“We discovered that about six containers of tyres were stuffed together as shown here, while the cylinders were seized from various sources.
“There are still more products waiting for court order to be destroyed because they are substandard”.

Talking on SON’s readiness for African Continental Free Trade (AfCFTA) Agreement, on the area of enforcing standards, he pointed out, “We are fully prepared and would work in collaboration with other agencies of government to ensure that only standard goods are allowed into our country”.

Also speaking, Engr Manafa, emphasised that SON as a regulatory Agency is intensifying its sensitisation programmes to enlighten Nigerians on the health implications of fake goods.

He assured that the Agency will continue to carry out its mandate to protect the nation’s economy from influx of fake goods. 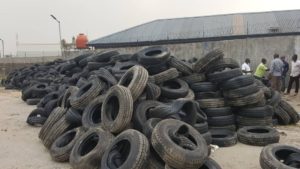 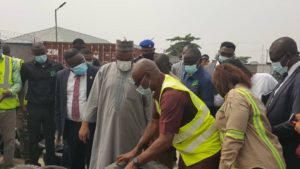