The news reaching our platform reveals that Standards Organisation of Nigeria, SON, is currently on red alert, warning Nigerians against the dangers of using substandard cooking gas cylinders in their homes.

The Agency also destroyed over 2,000 fake gas cylinders locally fabricated by roadside welders in the country.

Our Correspondent gathered that SON through credible Intelligence discovered the location within Onitsha area where the substandard gas cylinders were fabricated and swiftly seized them.

Destruction of the unsafe gas cylinders carried out in Enugu, was Supervised by the Director, Inspectorate and Compliance Directorate of SON, Engr. Obiora Manafa and his team.

Speaking during the destruction exercise, Engr Manafa, assured that SON is working tirelessly to prevent such unsafe cylinders from getting into the homes of people.

He explained that explosion caused by a substandard gas cylinder is capable of pulling down an entire building and claiming many innocent lives.

He frowned, “Our investigations revealed that the seized cylinders were made by roadside welders, who do not have the capacity to produce standard gas cylinders and do not even understand what standard cylinders production requires. When we saw the cylinders, we discovered that they were just cutting metals and welding them together. Such fake cylinders are like potential bombs’.

Responding to questions on how to identify safe and good quality cylinders, he informed, “For the end users, if you want to buy made-in-Nigeria gas cylinders, make sure that MAN-CAP logo is on such products.

“Also, if you want to buy imported cylinders, look out for SON’s product registration number on such cylinders”.

He emphasised, “Anyone who wants to import cylinders should come to SON for proper guidance on what to do”.

Speaking further, he urged manufacturers to produce standard cylinders that comply with NIS 69 standard, stressing that NIS 69 is the accepted standard for cylinders globally. 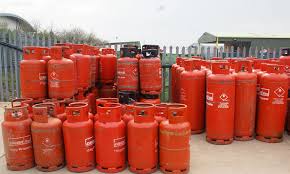