* Is NERC a compromised regulatory and fraudulent commission – the community asks

The people of Olambe Community have taken to the stress, to protest what they described as crazy and outrageous estimated electricity bills given to residents by Ikeja Electric Distribution Company (IKEDC) – Olambe Undertaking Unit.

The protest, which took place in the early hours of yesterday Monday, January 18, 2021, had family men and women carrying placards with different inscriptions such as; is NERC a compromised regulatory and fraudulent commission? We say no to estimated billing. We want reversal of all outrageous bills. Ikeja Electric conduct is fraudulent and ungodly. Give us free and unconditional prepaid meters.
Ikeja Disco has no human face. Officials of Discos are treating us like foreigners in our own country.

The peaceful protest lasted several hours, as
the Legal Officer of Olambe Area CDC, Olufemi Ilesanmi ESQ, delivered an official letter from the community to the Manager of IKEDC, Olambe Undertaking, Engineer Adunmo.

He said, “The people here are responsible family men and women coming out to express their grievances and not to cause any mayhem.”

His assertions: “We are here to express our grievances that payment of electricity bill is becoming a burden on the neck of Olambe people. The earlier we express our displeasure, the better because this is the beginning of the year.”

Engineer Adunmo, in his response said,
“The reason for the high bill is that Olambe and Matogbun feeders were given a special allocation in the month of December. The feeders were not off, except there is a major fault”.

Speaking further, Engineer Adunmo, received the letter, acknowledged it and promised to look into it.

The letter reads: “This is to inform you that a meeting was held by a large number of Electricity Consumers in Olambe Community, on January 16, 2021. The issues discussed extensively focused on outrageous bills given to residents.At the end, resolutions were passed as follows;

“That all Consumers demand for immediate and unconditional distribution of free prepaid meters.
That Ikeja Electric Olambe Undertaking workers are advised in their own interest not to embark upon any disconnection exercise fromJanuary 18, 2021 in any of the DTs under Olambe feeder and aforementioned DTs in (Paragraph 2).”

The letter emphasised that Olambe Area Community Development Committee will not tolerate any act of hooliganism by individuals or group within its community.

Comrade Ganiyu commended the community members for their support and large turn for the exercise. He pointed out, “This is self help and we must not relent in our support and contributions to the development of our community”. 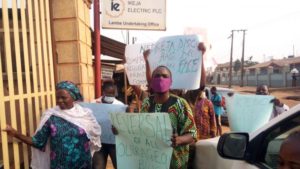