* Says NPA must wake up to its duty

It was a moment of encomiums for the Powerful Pen Media Chapel, as reputable stakeholders in the maritime industry commended the initiative of the Chapel on its special Congress that focused on Apapa gridlock and the way forward.

The theme of the Congress was; ‘Apapa Traffic and Skyrocketing Inflation in the Country; Effects on Port Operations and the Maritime Industry.’

His words, “I came in from Abuja this morning because of the importance of this Congress by Powerful Pen Media Chapel. If not for the efforts of this Chapel in exposing corrupt practices and the rot in the system, many businesses would have closed shop since.

“The Apapa traffic gridlock crippling commercial activities in the industry is man-made. Apapa and TinCan ports receive 65 percent of cargoes inflow into our country.

“Apapa and TinCan are the two most vibrant ports in Nigeria, yet, these ports are not given needed attention in terms of access roads maintenance.

“Another worrisome situation is poor traffic control, which contributes 35 percent to why Nigerian ports are the most expensive within West African sub-region.”

He alleged that agencies and government officials saddled with the responsibility of Controlling the traffic to ensure easy access to seaports are the same individuals making the situation worst, thereby killing businesses in the industry.

He openly alleged, “For instance, the traffic managers create so many artificial toll-gates for payment of compulsory fees into private pockets. Starting from Ijora, you will see over five toll-gates, even on top of the bridge. At each of the toll-gates, truck drivers pay huge sums before gaining access to the ports. From Ijora you will spend over N400.000 thousand before you are allowed to access the ports

“So, at the end, the cost is transferred to the masses, who are the final consumers. You can see clearly how Apapa gridlock is causing Skyrocketing Inflation in the country and the common man on the street is the most affected.”

He pointed out, “In fact, the cost of moving a container from TinCan Port to Alaba International Market, along Lagos-Badagry road is about N1.5million, as against N250.000 that was the initial payment. To move the same container from TinCan to Kano is over N3million, instead of the initial cost of N900.000. Before, moving a truck from TinCan to Ladipo used to be between N20.000 and 60.000, but now the cost has increased astronomically to over N1million. The traffic gridlock also increases the cost of doing business in the port industry.”

He added, “Lack of truck parks is another challenge, that is why you see trucks parking on the major roads”.

Responding to questions on the way forward, he said, “The Nigerian Ports Authority (NPA), must wake up to its statutory responsibility of managing the port access roads. Individuals constituting nuisance, who have no business being on the ports access roads must be made to leave.
The issues of corruption, as well as multiple access points for trucks resulting in chaos must be addressed proactively”.

In the same vein, the National Secretary, National Council of Managing Directors of Customs Licensed Agents, Mr. H. Okwuosa, frowned, “The traffic gridlock on ports access roads is not only killing businesses but also driving away investors.

“The situation is so bad that you cannot walk on the ports access roads and breath well. Human waste is scattered on both sides of the roads”.

Mr Okwuosa advised the Federal Government to open up Eastern Ports and the rail system, in order to ease the pressure on Apapa ports.

Another stakeholder, the Chairman of Bonntex Nigeria limited, in person of Mr Boniface Okoye, alleged that government has allowed a cabal to take over the maritime business in Nigeria, to the detriment of the larger economy.

According to him, “Now, we are talking about Barge operations. Do you know that the Barge operators in the industry are also the owners of the terminals, therefore making it extremely difficult to regulate the sector.

“Due to insincerity on the part of regulators, the cost of trucking is indeed astronomical.

The Bonntex Chairman emphasised, “Government must take urgent steps to tackle the menace now, to save the maritime industry from total collapse.”

On the whole, the Bonntex boss, commended Powerful Pen Media Chapel of MAJAN for a successful Congress, and the courage to talk about such important issue affecting the nation’s economy.
He received a copy of Powerful Pen Newspaper, published by MAJAN with great delight. 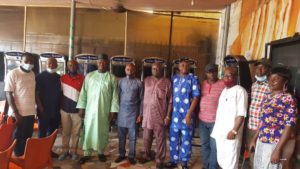